This was the second such structure found beneath the International Border (IB) in Hiranagar sector in 10 days, fourth in Jammu region within six months and 10th in the past decade. 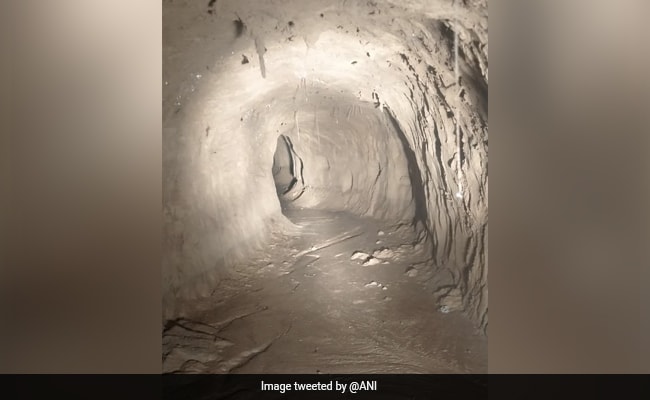 The tunnel was detected during an anti-tunnelling operation in the Pansar area of Hiranagar.

Days ahead of Republic Day, the Border Security Force (BSF) achieved a major success when it detected a 150-meter-long underground tunnel constructed by Pakistan in Jammu and Kashmir's Kathua district to facilitate the infiltration of terrorists for subversive activities, a top official said.

This was the second such structure found beneath the International Border (IB) in Hiranagar sector in 10 days, fourth in Jammu region within six months and 10th in the past decade.

Inspector General of BSF, Jammu frontier, NS Jamwal said the secret tunnel was detected during an anti-tunnelling operation in the border outpost (BOP) Pansar area of Hiranagar, opposite Abhiyal-Dogra and Kingre-de-Kothe in Shakargarh (Pakistan).

"There were inputs from intelligence agencies about existence of a tunnel in Pansar area and possibility of infiltration attempt ahead of Republic Day. Accordingly, our anti-tunnelling campaign was intensified, which led to the detection of the tunnel," Mr Jamwal, who rushed to the spot, told reporters there.

He said Pakistan has constructed this tunnel from the zero line and it is about 150-meter-long with 25 to 30 feet depth and two to three feet diameter so that one can crawl easily to pass through this tunnel.

"It is a big achievement and full credit goes to the troops on the ground and the intelligence agencies who are providing regular inputs to us," he said, highlighting the role of Pakistan in the construction of tunnels to facilitate infiltration of terrorists into India.

"The whole Pakistani establishment is involved as nobody can come close to zero line without the knowledge of Pakistani Army, Rangers and ISI. The tunnel was constructed with an engineering effort and its construction demonstrates that a thought process was involved wherein the experts were involved to study and check the soil so that the tunnel can sustain and do not collapse," Jamwal said.

The Jammu BSF chief said such type of a construction is not possible without the support of the administration.

"This is a difficult and sensitive area. This is the same area where we shot down a hexacopter in June last year. Two years earlier, there was a sniping incident from Pakistan and four to five years back, a fire assault also took place on BSF troops. It seems they have started the construction of the tunnel during that time," the IG BSF said, adding that in November 2019, the force fired after noticing movement of terrorists and neutralised their bid and forced them to flee back.

Mr Jamwal said there was no specific input with regard to December 26 but the BSF is always alert and fully prepared to safeguard the borders of the country, especially during the National Days.

"Border is always challenging and there is regular firing (from Pakistan). Our effort is to improve our security gird as much as we can," he said, adding that "we have full government support".

Responding to a question about intelligence inputs suggesting presence of three to four terrorists in a launching pad opposite Shakargarh to sneak into this side and carry out a strike on Republic Day, he said "the launch pad you are talking is about 3 to 4 km from this BOP and we have information and we are alert (to the threat)".

"There are five to six launch pads on the Pakistani side between Shakargarh and Sialkote which are both notorious. This area (Hiranagar sector) is very sensitive because the (Jammu-Pathakot) highway is very close and so the vital installations dotting the road, which usually are terror targets," the BSF official said.

He said the Pakistani side has deliberately kept their side of the border unattended and are not even allowing their farmers to come closer, which are part of a "well thought our strategy to push infiltrators".

Asked about the growing threat of infiltration attempts along the IB after snowfall led closure of passes on the Line of Control (LoC), Jamwal said the BSF is not taking any chances and is fully alert as attempts of infiltration were detected along the LoC despite snowfall.

Responding to another question about possibility of more tunnels, the IG said the alertness of the BSF and stepped up anti-tunnelling operation led to the detection of two tunnels this month, besides foiling attempts by Pakistan to smuggle weapons through drones.

"This tunnel seems like an old one, which was evident from the recovery of gunny bags with Pakistani markings. The special drive will continue," he said.

On January 13, a 150-metre-long tunnel was detected in Bobiyaan village in the same sector.