MJ Akbar had sued journalist Priya Ramani for defamation over her magazine article alleging harassment by him several years ago. 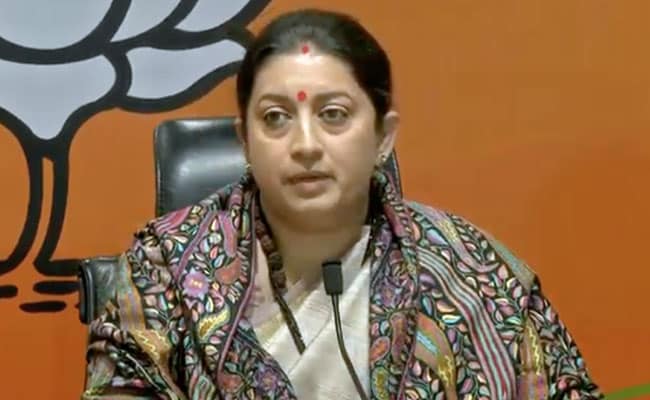 The protectors of law can take action based on the women's statements, Smriti Irani said (File)

Union Minister Smriti Irani, reacting to the Delhi court order acquitting journalist Priya Ramani in a defamation suit filed by former minister MJ Akbar, said today that "due protection had been given to women" by law.

"I have stated this before, due protection has been given to women and the protectors of law can take action based on their statements," Smriti Irani told reporters when the news came in during her press briefing.

The court said a woman has the right to put grievances before any platform of her choice even after decades. MJ Akbar, a senior editor, resigned as Union Minister in 2018 in a flurry of sex harassment allegations that emerged in the MeToo campaign in India. He denied all the allegations.

He sued Priya Ramani for defamation over her magazine article alleging harassment by him several years ago.

Dismissing the complaint, Additional Chief Metropolitan Magistrate Ravindra Kumar Pandey said it was "shameful" that crimes against women were taking place in a country where epics like Mahabharata and Ramayana were written about respecting women.

Making references to the ancient texts, the judge said the glass ceiling would not prevent Indian women from advancing in a society of equal opportunities.

Women can't be punished for raising instances of sexual abuse, said the court.

Even a man of social status can be a sexual harasser, the court said, adding that the "right of reputation" cannot be protected at the cost of right to dignity.

"Sexual abuse takes away dignity and self-confidence (and) the social stigma attached with the allegations.. society must understand the impact of sexual abuse and harassment on its victims," the judge said, in a verdict that has been widely praised.