After Balakot, Army Would Have Retaliated If Pakistan Had Hit Ammo Dump

In an interaction on Wednesday, senior army sources said if the Pakistani Air Force had indeed struck an ammunition depot that appeared to be one of their targets, the Indian army would have vigorously responded. 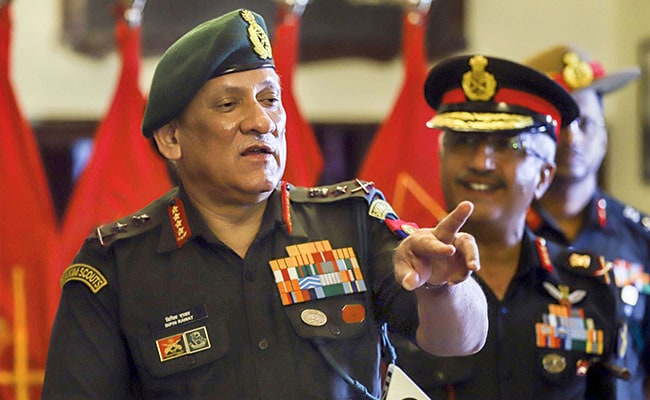 We are prepared for a response along the retaliatory matrix, Army Chief Bipin Rawat said

The Indian Army would have retaliated if the Pakistan Air Force had succeeded in hitting the ammunition dump it targeted on the Rajouri-Poonch sector on February 27, a day after India struck a terror training camp in Pakistan's Balakot. This could have brought the two nuclear-armed neighbours precariously close to a full-blown war.

A day earlier, the Indian Air Force had carried out strikes on the terror training camp of the Jaish-e-Mohammed in Balakot. Reacting to this, the Pakistan Air Force launched "Operation Swift Retort", where they appeared to miss their targets, which were military installations in the Rajouri-Poonch sector along the Line of Control.

The Pakistan Air Force claims it deliberately missed the targets to send India a strong message of its capability. The Indian military establishment has always argued that the Pakistani Air Force simply missed their targets.

In an interaction on Wednesday, senior army sources said if the Pakistani Air Force had indeed struck an ammunition depot that appeared to be one of their targets, the Indian army would have vigorously responded.

Senior sources have also told NDTV that there could also have been an escalation by the Indian army had another Pulwama-like situation taken place within days of the attack in which 40 personnel of the CRPF were killed by a suicide bomber.

Indian Army Chief General Bipin Rawat has said: "The situation along the LoC can escalate at any time. We are prepared for a response along the retaliatory matrix."

Over the weekend, Air Chief Marshal BS Dhanoa (Retired), who commanded the Air Force during the Balakot attacks earlier this year, said that India was on the verge of escalating the conflict along the LoC if Pakistan had struck targets on Indian territory.

"Since the PAF had targeted military installations on the 27th of February (a day after India struck the Jaish-e-Mohammed camp near Balakot), the Pakistan Army had now become a legitimate target and had their strikes been successful, we would have put a considerable weight of attack on their forward brigades," he said.