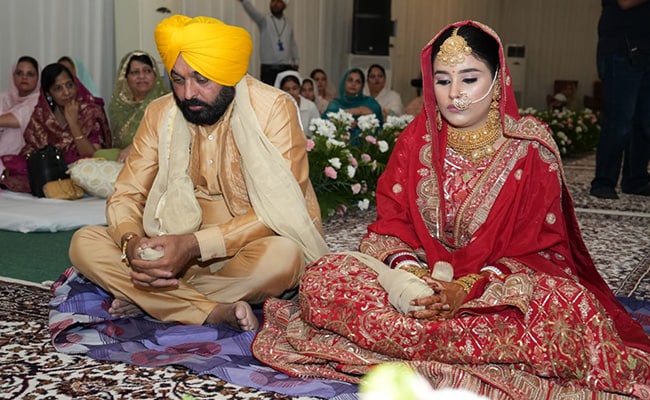 On July 7, Bhagwant Mann got married to Dr Gurpreet Kaur

The Shiromani Gurdwara Parbandhak Committee on Thursday claimed that the vehicle carrying the holy Guru Granth Sahib was "checked" on the marriage ceremony of Punjab Chief Minister Bhagwant Mann, calling it an "insult to the honour of the Guru".

It is an "insult to the status and honour of the Guru," he said, adding that a purported video showing it has hurt Sikh sentiments.

"It was even more hurtful that this incident took place at the residence of the state's chief minister, who is committed to the promotion and respect of every religion. It is his responsibility to respect sentiments of all religions and understand the honour and importance of religious scriptures," said Dhami.

Several SGPC members led by Dhami handed over a memorandum of demand to Giani Harpreet Singh, Jathedar of the Akal Takht, the highest Sikh temporal seat.

On July 7, Chief Minister Mann got married to Dr Gurpreet Kaur and the marriage was solemnised according to Sikh rituals.