The singer's father Balkaur Singh had in his complaint said that he saw seven to eight people shooting up his son's car. 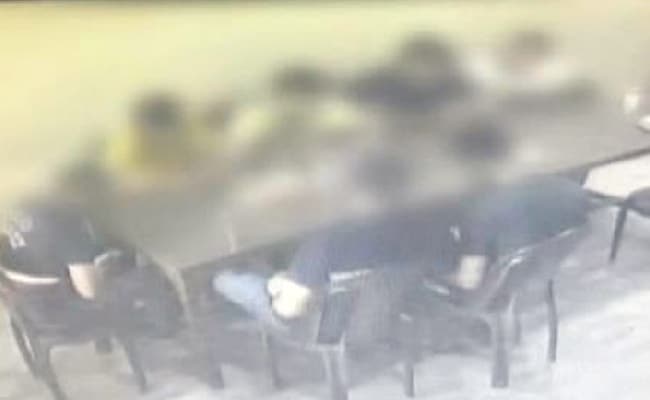 Six suspects have been detained in the case so far. (Screengrab from CCTV footage)

The Punjab police are scouring through CCTV footage to identify the men who assassinated 28-year-old Punjabi singer Sidhu Moose Wala on Sunday. Fresh footage showing seven men eating at a restaurant at 10:30 am on May 29 has piqued the interest of the investigating authorities. The singer's father Balkaur Singh had in his complaint said that he saw seven to eight people shooting up his son's car. The state police's Special Investigation Team (SIT) is now examining the footage.

Another CCTV footage had emerged earlier on social media showing two cars trailing Sidhu Moose Wala's vehicle moments before he was shot dead in Mansa district of Punjab. The video, however, is not verified by the state police. Yesterday, Sidhu Moose Wala was shot over 30 times by around eight to 10 attackers, according to police sources.

Six suspects have been detained in the case so far. Punjab Chief Minister Bhagwant Mann has ordered an investigation into why the popular rapper-singer's security was pared down. He was on the list of 424 people whose security cover was withdrawn by the Punjab police two days ago.

Canada-based gangster Goldy Brar claimed responsibility for Sidhu Moose Wala's murder in a Facebook post last evening. Goldy Brar is a close aide of gang leader Lawrence Bishnoi, a former student leader of DAV College in Chandigarh who is the main suspect in the singer's murder and is in Tihar jail in a different case.

Bullets found at the spot of the killing in Punjab's Mansa district indicate an AN 94 Russian assault rifle was also used in the attack. The police have also found a pistol.

For First Time Ever, Top Body Of Scientists (CSIR) Gets Woman Boss