Shivpal Yadav, who founded the Samajwadi Secular Morcha recently, said he was ready to contest the 2019 polls on all 80 seats in Uttar Pradesh, except the Mainpuri seat, if his suggestion was not met. 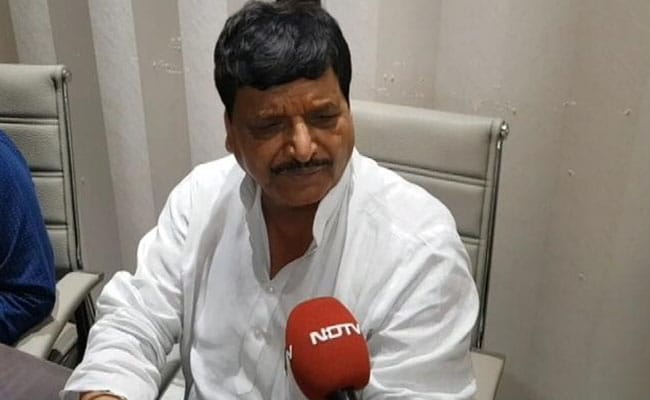 Shivpal Yadav said they were strengthening the Samajwadi Secular Morcha

If Akhilesh Yadav talks of fighting with "communal BJP", the Samajwadi Secular Morcha (SSM) should be included in the proposed alliance between the Samajwadi Party and BSP, sidelined SP leader Shivpal Yadav said Sunday.

Shivpal Yadav, who founded the Samajwadi Secular Morcha recently, said he was ready to contest the 2019 polls on all 80 seats in Uttar Pradesh, except the Mainpuri seat, if his suggestion was not met.

"If he (Akhilesh) talks of fighting against communal party BJP, SSM should be included in the proposed alliance between SP and BSP. If not, I am ready to contest on all 80 seats in Uttar Pradesh in 2019 Lok Sabha polls, except for the Mainpuri seat, where 'Netaji' (Mulayam Singh Yadav) is likely to contest," he told PTI.

"Even if I am not included in the SP's alliance, it will be an opportunity for my Morcha as we will get all the support on seats left by the SP for BSP and others. All 'Samajwadis' will unite with us. We will be winning 20-30 seats," he said.

About his relations with SP supremo and brother Mulayam Singh Yadav, Shivpal Yadav said, "I have his blessings. I am offering party president post to him and also ticket from Mainpuri".

On his position in the newly-formed SSM, Mr Shivpal said, "I am the convenor of SSM. If 'Netaji' does not accept the presidentship, we will discuss it later".

When asked about his future course of action, the SSM leader said, "We are strengthening the Morcha. District and state units are to be formed. People are coming to us in good numbers. I am looking for space for the party, which is yet to be registered with the Election Commission. The party flag is also be to finalised".

"I am not going to resign from the assembly. It is up to the Samajwadi Party to decide. They are free to initiate action against me," he said.

Stating that he was open for alliance with "like-minded" parties, Mr Shivpal said, "I had talks with senior leader Sharad Yadav and others...There is no enemy in politics. I am even open for an alliance with Congress and Bahujan Samaj Party (BSP)".

On Rajya Sabha MP Amar Singh's statement that he had fixed Shivpal Yadav's meeting with a senior BJP leader, but he did not turn up, the sidelined SP leader said, "You see...then they (SP) charge me with joining hands with BJP".

Asked from where was he planning to contest the next Lok Sabha polls, the SSM leader said, "I can contest from anywhere. Party workers will decide it in future".

He said he formed the Morcha to protect his "honour" and not seek any post in the Samajwadi Party.

"I never wanted to part ways (with the Samajwadi Party). I only wanted honour, which I did not get after the change of leadership in the party. I never wanted posts. I took this step (of forming the Morcha) out of compulsion to protect my honour," he said.

Shivpal Yadav had launched the Morcha last month, stating that he would seek the support of "neglected" party workers. He later announced that his political outfit would contest on all Lok Sabha seats in Uttar Pradesh.

He has maintained a low profile after the worst ever feud in the Samajwadi family broke into the open before 2017 assembly elections.