Maharashtra Government Formation: The three parties claim the support of enough MLAs for a majority in the 288-member Maharashtra assembly. 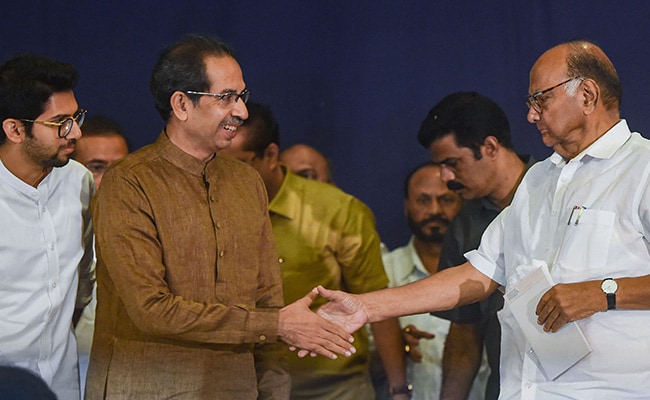 The Shiv Sena, Nationalist Congress Party (NCP) and Congress staked claim to power in Maharashtra on Monday after submitting signatures of support from 162 MLAs to the Governor. The NCP, whose Ajit Pawar claims the party is with the BJP, submitted the signatures of 51 of its 54 MLAs.

The three parties claim the support of enough MLAs for a majority in the 288-member Maharashtra assembly.

The Shiv Sena submitted the signatures of 63 MLAs (including independents), the Congress 44, the NCP 51. The Samajwadi Party also joined the three parties and has submitted signatures of two members.

The parties went to Raj Bhawan, Governor Bhagat Singh Koshyari's residence in Mumbai, at a time the Supreme Court heard their petition against the dramatic early morning oath ceremony in which the BJP's Devendra Fadnavis became Chief Minister with Ajit Pawar of the NCP as his deputy.

The Supreme Court will announce its decision tomorrow on the petition, which calls the sudden government formation "unconstitutional".

The BJP told the Supreme Court that it has the support of 170 MLAs, including all 54 of the NCP. On the other hand, the Sena-NCP-Congress also submitted an affidavit to the court claiming the support of 154 MLA; a few signatures were missing as the MLAs were on their way back at the time, claimed NCP.

Ajit Pawar's uncle Sharad Pawar, the chief of the NCP, says 53 MLAs are with the party. He alleges that Ajit Pawar tricked the Governor with letters of support collected from MLAs for the Sena-led alliance.

The three NCP signatures missing from the letter submitted to the Governor this morning are those of Ajit Pawar, Anna Bansod and Narhari Zhirwal.

The Sena, NCP and Congress hope the Supreme Court will announce a test of strength in the Maharashtra assembly at the earliest.

To protect their flock from alleged inducement attempts ahead of a floor test, all parties have put up their MLAs at different hotels in Mumbai. Many Congress MLAs are in Jaipur.