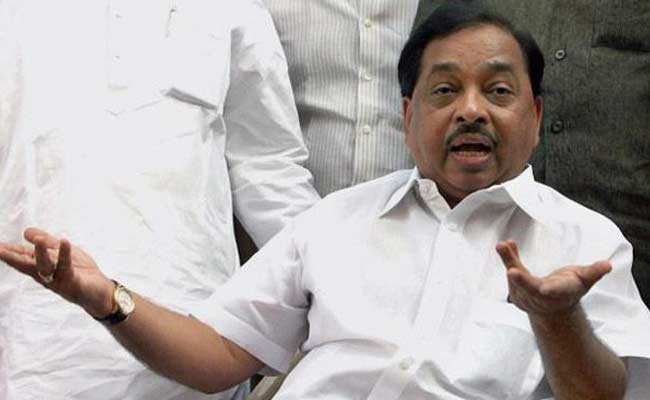 Congress leader Narayan Rane also accused Uddhav Thackeray, son of the Sena patriarch, of trying to grab the bungalow in Central Mumbai which is a heritage site. (Press Trust of India file photo)

He also accused Uddhav Thackeray, son of the Sena patriarch, of trying to grab the bungalow in Central Mumbai which is a heritage site, and that the BJP and Sena have struck a "deal" over the memorial.

"While Fadnavis is eager to save his chair, Sena president Uddhav Thackeray wants to grab the Mayor's bungalow which is a heritage site. It's selfish motive from both sides and not out of love and respect for Bal Thackeray," Mr Rane told reporters in Mumbai.

Mr Rane, former chief minister and once a blue-eyed boy of Thackeray senior before he joined the Congress, questioned the rationale behind Mr Fadnavis' announcement saying since the bungalow is a heritage site it cannot be demolished.

"Similarly, due to the CRZ (Coastal Regulatory Zone) rules, no new structure can come up. There has been no proposal for such a memorial from the Mumbai civic body's improvement committee. Also, the state cabinet did not deliberate on the matter. What was the hurry?" Mr Rane asked.

He said the chief minister's conduct was not befitting the post he held.

"In the Kalyan-Dombivali municipal corporation polls, he (Fadnavis) said he knew how to put his hand in the tiger's jaws and count its teeth (in reference to Sena). Fadnavis also called opposition parties 'beimaan' (dishonest). Such language has never been used by a chief minister," Mr Rane said.

Taking a dig at Mr Uddhav Thackeray, Mr Rane said the former had threatened to "extern" the BJP from KDMC during the campaigning for the civic polls, "but Uddhav cannot threaten but only compromise".

"However, Sena decided to join hands with the BJP again in Kalyan-Dombivali civic body despite party leaders saying that Sena can get its Mayor elected without the support of BJP. MNS was ready to vote for the Sena candidate," Mr Rane said.

He said such a "deal" between the BJP and Sena over Balasaheb's memorial was not good.

"A befitting memorial is not possible in the existing Mayor's bungalow. Fadnavis announced the decision even before a public trust was formed. How can Fadnavis name who will head the trust," Mr Rane asked.

Mr Rane said Mr Thackeray's memorial should be in Dadar area in the vicinity of Shivaji Park and should be modelled on the lines of the upcoming memorial of BR Ambedkar on the Indu mills land.

He said the chief minister and Mr Uddhav Thackeray were indulged in petty politics and turning a blind eye to drought conditions.

"I visited Solapur district last week. There is a severe water shortage. There are no Employment Guarantee Scheme (EGS) works, cattle camps and the district has not been included in the list of drought-hit areas. Marathwada has highest number of farmer suicides (nearly 1,000), most of them in Beed," Mr Rane said.

To a question on whether he has been approached to contest the Legislative Council elections scheduled next month and later next year, the Congress leader said, "I have not been asked yet".