US, Japan To Work With India For An Open Indo-Pacific Region: Shinzo Abe

Over the past few years, in particular under the Trump administration, a free and open Indo-Pacific has emerged as an important aspect of the relationship between the US and Japan and other like-minded nations in the region. 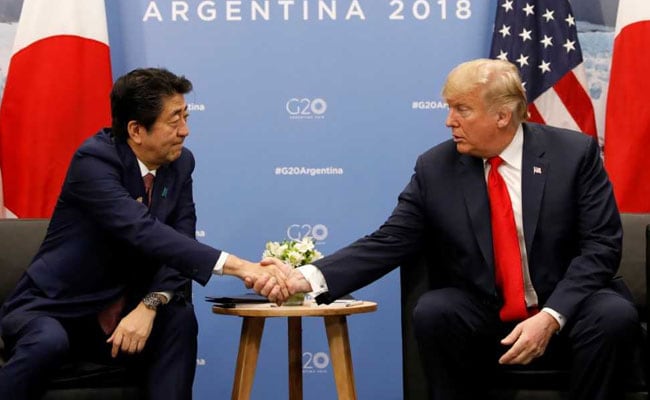 "We will be promoting the idea forcefully," Shinzo Abe said at a news conference with Donald Trump (File)

The US and Japan will work with countries like India, Australia, ASEAN, UK and France to "forcefully" promote the idea of a free and open Indo-Pacific, Japanese Prime Minister Shinzo Abe said Monday, amidst China flexing its muscle in the strategically important region.

Over the past few years, in particular under the Trump administration, a free and open Indo-Pacific has emerged as an important aspect of the relationship between the US and Japan and other like-minded nations in the region.

These countries believe that a military build-up by China and its aggressive behaviour in the region poses a threat to a free and open Indo-Pacific, which in the recent past has emerged as a key hub for global trade, economic activity and maritime security.

"Going forward, we will walk hand in hand and promote the cooperation for the realisation of this common vision of our two nations. We will be promoting the idea forcefully," Abe told reporters at a joint news conference in Tokyo with President Donald Trump, who is on a four-day state visit to Japan.

"With countries concerned -- like Australia, India, ASEAN, UK, and France -- we will fortify the cooperation toward the realisation of a free and open Indo-Pacific. We will enhance and expand our efforts. We agreed on that," Abe said.

"In today's summit meeting, we welcomed the steady progress of US-Japan cooperation, looking toward the creation of free and open Indo-Pacific, including the areas such as energy, digital, and infrastructure," said the Japanese prime minister.

The Indo-Pacific is a biogeographic region, comprising the Indian Ocean and the western and central Pacific Ocean, including the South China Sea.

The US has conducted a series of "freedom of navigation" exercises in the disputed South China Sea, triggering protests from Beijing over what it says is infringement of sovereignty. China claims almost the entire South China Sea, while Brunei, Malaysia, the Philippines, Vietnam and Taiwan are also claimants.

The growing presence of the Chinese navy in the Indian Ocean where it already acquired a logistic base at Djibouti has aroused concerns in India besides acquisition of the Hambantota port in Sri Lanka on a 99-year lease.