"Shaheen Bagh Can Become An Example": Mediators To Protesters On Day 2 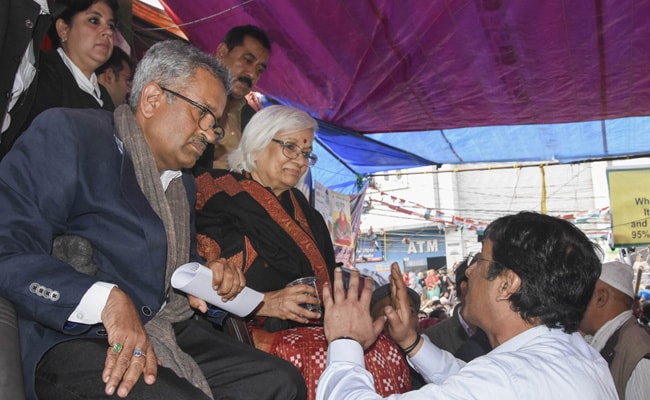 Shaheen Bagh has been the epicentre of anti-CAA protests in Delhi since mid-December.

Voices of the protesters at Shaheen Bagh will be heard but demonstrations should not inconvenience others, two mediators appointed by the Supreme Court said on Thursday, urging the women, who have led a protest at the South East Delhi neighbourhood against the contentious Citizenship Amendment Act or CAA for over two months, to end their roadblock.

Senior lawyers Sanjay Hegde and Sadhana Ramachandran visited Shaheen Bagh for the second day on Thursday but said that the media should not be present during the talks with protesters.

The protesters tried to convince them that they want to present their issues before the media, but journalists were later asked to leave.

"If we actually can come up with a solution then this protest will become an example," Sanjay Hegde said.

"We are here to listen to your views. The protest must not cause inconvenience to others. The protesters think that if you vacate Shaheen Bagh no one will listen to you. Till the time we are here, the Supreme Court is here, your voices will be heard," he said.

Sadhana Ramachandran said, "We cannot speculate what will happen in the Supreme Court. We applaud the women at Shaheen Bagh. You have the right to protest. The petition for which we are here is regarding the road which has been blocked. The Supreme Court has extended its hand. We are trying to end this stalemate."

"We will not have any other option but to go back to the Supreme Court if there is no result of this mediation. Then the government will be able to do what it can," she added.

Shaheen Bagh has been the epicentre of anti-CAA protests in Delhi since mid-December following a brutal police crackdown on demonstrators in the neighbouring Jamia Millia Islamia that left over 200 students and around 30 policemen injured.

While the protest, led by women, has been accused by the ruling BJP of inconveniencing residents travelling between Delhi and Noida, media reports have questioned the roadblocks by the police that have obstructed alternative routes in the area.

The protesters at Shaheen Bagh say the CAA, enacted into law this year, is discriminatory towards Muslims. It promises citizenship to only non-Muslim refugees from Pakistan, Afghanistan and Bangladesh, making religion a test of Indian citizenship for the first time in violation of the secular constitution.

Critics of the law say it can be used to target Muslims in combination with the planned National Register of Citizens. However, the government says the CAA is intended to help people who have faced religious persecution in the three neighbouring countries.