Union minister Prakash Javadekar, who called the Chief Minister a "terrorist", today said AAP was "trying to cause riots in Delhi". "Sanjay Singh got this man to join the party as he wanted to incite the young partymen," the minister said. 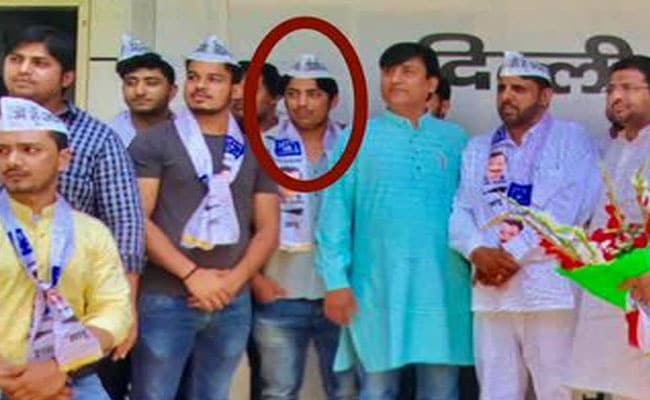 The police speculated that the photos were a year old, taken when he and his father had joined AAP.

Photos of the Shaheen Bagh shooter with senior Aam Aadmi Party leaders raised a political storm late on Tuesday evening, with the BJP claiming it proved the ruling party's complicity in the protests against the contentious Citizenship Amendment Act. AAP said it was all a BJP conspiracy and the police was acting under the orders of Union home minister Amit Shah. Senior AAP leader Sanjay Singh said they would send a legal notice to the officer who made the claim and also complain to the Election Commission.

With just three days to go before the Delhi assembly elections, the Delhi Police claimed that the shooter had confessed to being a primary member of the Aam Aadmi Party. As proof, they spoke of photographs found in 25-year-old Kapil Gujjar's phone with AAP's Sanjay Singh and Aatishi that were leaked earlier.

The police speculated that the photos were a year old, taken when he and his father had joined AAP. BUt said they were trying to figure out the date when the photos were clicked.

Accusing the police of sharing information when the investigation is not complete and a Model Code of Conduct – a series of dos and don'ts to be observed ahead of elections – is in place, Sanjay Singh said: “Amit Shah is using all kinds of tactics and conspiracies... You (the police) are interfering in the election. In that case, the DCP (Deputy Commissioner of Police) should wear a lotus”.

The police, he said were acting like “kathputli (puppets) of the BJP”. "BJP spokesperson Rajesh Deo, who is by mistake the DCP of Crime Branch is giving statements," he added.

Union minister Prakash Javadekar, who called the Chief Minister a "terrorist", on Tuesday said AAP was "trying to cause riots in Delhi". "Sanjay Singh got this man to join the party as he wanted to incite the young partymen," the minister said.

"The country and Delhi today saw the dirty side of the Aam Aadmi Party. Kejriwal and his people sold the country's security for political ambition," BJP chief JP Nadda said. "In the past, Kejriwal used to insult the Army and support terrorists but today his relation with a person linked to terror activities got revealed," he further said.

At a press conference called late in the evening, Sanjay Singh hit back. Producing a series of photographs of BJP leaders, including the Prime Minister, with various people named in criminal cases, he said appearing in a photo with someone proved nothing.

Eyewitnesses said when his gun jammed, he tried to run but was caught. While being led away, he was heard saying: "Humare desh mein sirf Hinduon ki chalegi aur kisi ki nahi (in our country only Hindus will prevail)."