Earlier, sources had claimed that Mr Thackeray was in touch with BJP leaders to find a way out of the political crisis facing the Maha Vikas Aghadi (MVA) government 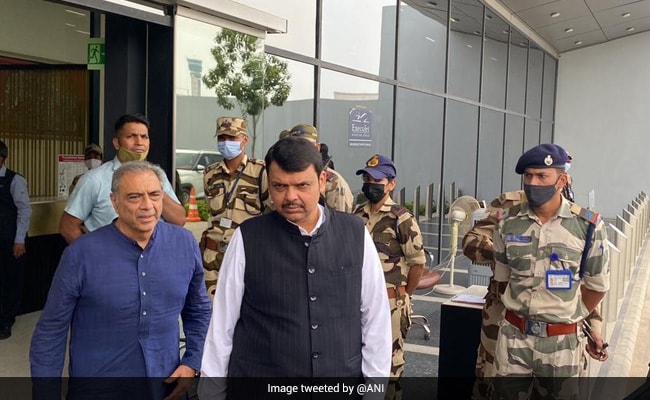 In an official statement, Shiv Sena spokesperson Harshal Pradhan said, "Maharashtra CM Uddhav Thackeray called Devendra Fadnavis to save the government some such news is going on but this news is only to mislead. Whatever, Uddhav Thackeray has to say, he speaks publicly."

Earlier, sources had claimed that Mr Thackeray was in touch with BJP leaders to find a way out of the political crisis facing the Maha Vikas Aghadi (MVA) government that includes the Nationalist Congress Party and Congress apart from Shiv Sena.

The sources had also said that Thackeray was ready to resign on June 22 at 5 pm after it was clear that there was "no way out" of the political crisis facing the Maharashtra government but MVA allies convinced him not to resign.

A core committee meeting of the Bharatiya Janata Party's Maharashtra unit was held on Monday to discuss the state's political situation. The BJP has decided that the party will follow the "wait and watch" approach.

"We had clarified yesterday as well that we will hold another core team meeting in the days to come, keeping in mind its necessity - if any. We will deliberate and make a decision. Right now we are in a wait-and-watch mode," said Sudhir Mungantiwar, BJP leader.

Meanwhile, rebel Shiv Sena MLAs of the Eknath Shinde camp, who are currently in Assam will huddle together this afternoon to discuss the further plan of action, amid the ongoing political crisis in Maharashtra.

According to the sources, they are expected to take an important decision today. Independent MLAs might approach Maharashtra Governor Bhagat Singh Koshyari very soon.

Sources have earlier learned that the MLAs are likely to stay for more days at the Radisson Blu Hotel in Guwahati and are unlikely to return before July 5.

"Rebel Maharashtra MLAs likely to stay for more days at the Radisson Blu Hotel in Guwahati, Assam. The hotel was booked till July 5 and the booking can now be extended as per requirement," sources said on Tuesday.

Notably, the political tussle in Maharashtra between Shiv Sena and the rebel group led by Eknath Shinde has now reached the Supreme Court. The pleas filed by the breakaway camp challenge the disqualification proceedings against Shinde and 15 other rebel MLAs.

On Monday, a separate plea was filed by Shinde in the top court regarding the safety of the legislators who have challenged party chief and Maharashtra chief minister Uddhav Thackeray. A bench of Justices Surya Kant and JB Pardiwala heard the pleas on Monday.

The Supreme Court on Monday granted interim relief to rebel Shiv Seva leader Eknath Shinde and other MLAs to file their reply to disqualification notices issued to them by the Deputy Speaker of Maharashtra Assembly by July 12, 5.30 pm.