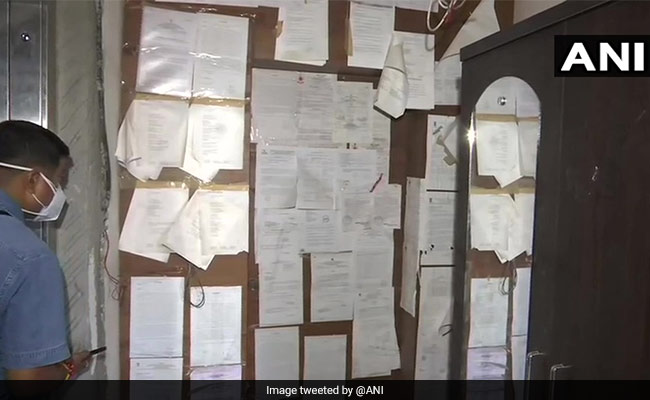 The notices are from banks, courts and enforcement agencies.

At a time when the government is trying to bring back Mehul Choksi after his arrest in Dominica, the entrance to his Mumbai residence sums up in detail the string of allegations against the fugitive businessman.

A photo shared by news agency ANI showed the wall at the entrance plastered with notices issued by banks, courts and enforcement agencies 2019 onwards.

The diamond jeweler, along with his nephew Nirav Modi, is wanted in India for allegedly swindling Rs 13,500 crore from the state-run Punjab National Bank using fake documents. Mr Modi, jailed in London, is contesting his extradition to India.

After fleeing India, Mr Choksi took the citizenship of Antigua by making investments there. He was recently arrested in Dominica while he was allegedly trying to escape to Cuba. Owing to a lookout circular issued by Interpol against him, he was caught by police at a beach in Dominica.

Mr Choksi has been charged with entering the country illegally. A Dominican court has extended till June 2 its order to restrain authorities from removing him from the country.

In Antigua, Mr Choksi was fighting two cases related to his citizenship and extradition to India, according to the CBI.

Following his arrest in Dominica, Antigua Prime Minister Gaston Browne was quoted as saying that the wanted businessman should be sent back to India directly.

"We asked them not to repatriate him to Antigua. He needs to return to India where he can face the criminal charges levelled against him," Antigua News Room, a media outlet, quoted Mr Browne as telling the press. "We will not accept him back. He made a monumental error by skipping the island," Mr Browne said, according to news agency ANI.

But Mr Choksi's lawyer says he is no longer a citizen of India and can only be sent back to Antigua. "Moreover, there is an Antiguan High Court order against the processing of any request from India, so my understanding is that he has to be sent back to Antigua only -- there is no question of him being sent to India," said Vijay Aggarwal.

Sources in the government have said India will use diplomatic channels to bring Mr Choksi back.