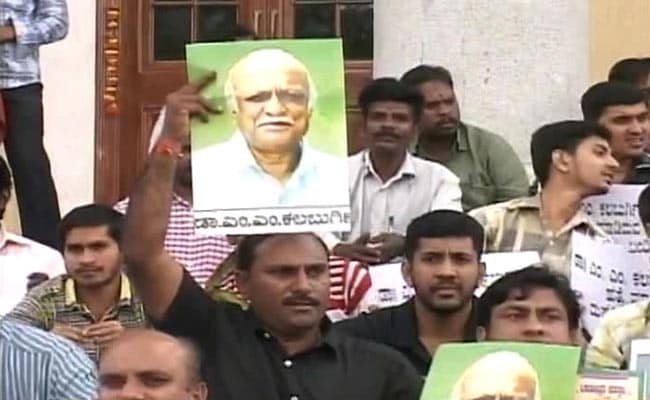 The 77-year-old Professor Kalburgi was shot dead at his home in Karnataka's Dharwad on Sunday morning by gunmen who came on a bike.

Mangalore, Karnataka: Four days after the murder of scholar MM Kalburgi, a man has been arrested for sharing an inflammatory tweet.

Prasad Attavar, who recently quit the Sri Ram Sene, a fringe group notorious for moral policing, was questioned by the Mangalore police before being taken into custody.

77-year-old Professor Kalburgi was shot dead on Sunday at his home in Karnataka's Dharwad on Sunday morning by gunmen who came on a bike.

Professor Kalburgi, a well-known rationalist, had upset many rightwing Hindu groups with his views on religion. He had received many threats to his life, allege family and friends, and he had been given armed escort, which had been withdrawn recently on his request.

After the murder, Bajrang Dal activist Bhuvit Shetty had posted a controversial tweet, which he had deleted later. Mr Shetty was arrested on Monday but released on bail.

The Bajrang Dal, which is affiliated to a group of organisations led by the BJP's ideological mentor Rashtriya Swayamsevak Sangh, had held several protests against Professor Kalburgi.

The Sri Ram Sene came into the national spotlight in 2009, when its activists were caught on camera thrashing women at a pub and dragging them by their hair, accusing them of denigrating their culture.