"We somehow survived. I am happy I have the most precious with me - my mother, wife and children and NRC document. Without them, I would be stateless" Samsul Alam told NDTV

As a deadly deluge threatens to devour his village - Mahmari in Assam's Morigaon district - Samsul Alam, 65, struggles to stay afloat on a raft made of banana tree trunks lashed together. He tries hard to row to safety, but the current is too strong, and the flood waters push his raft back. Morigaon is one of the worst-hit districts in the state, where the overflowing Brahmaputra has breached three embankments.

Miles away, members of the National Disaster Response Force's (NDRF) 1st battalion - Kailash Sharma and Pavesh Kumar - are leading a team of rescue officials in four rubber boats. With flood waters rising at break-neck speed, they are tasked with rescuing people stranded in Mahmari and Tengaguri villages.

As the NDRF teams reach Samsul Alam he waves, desperately hoping they will see him before the flood waters wash him and his raft away. They do. Parvesh Kumar spots him and pulls him aboard the boat. Samsul Alam is in tears. Sharma assures him that his family will also be saved in time.

Twenty minutes later an NDRF team rescues Samsul Alam's bedridden mother, who is 100 years old, and his wife and children.

A relieved Samsul Alam is thankful for his rescuers and, as importantly, that he was able to save his NRC document.

"We somehow survived, we kept floating on a banana trunk, don't have anything to eat for two days. Glad that we are alive. This flood has taken away my home, my land and my livelihood but I am happy I have the most precious with me - my mother, wife and children and NRC document. Without them, I would be stateless" Samsul Alam told NDTV. 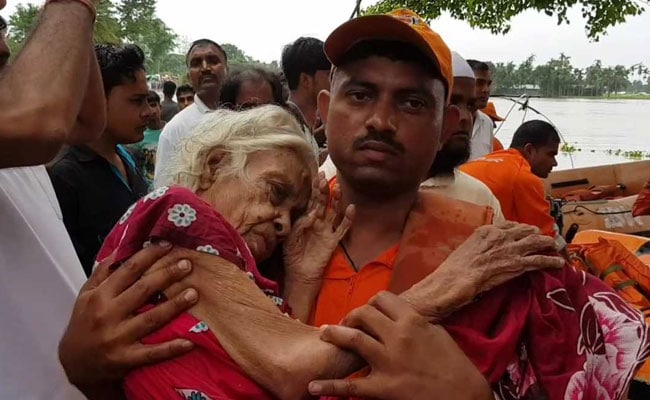 In flood-ravaged rural Assam thousands who are displaced are as worried for their lives and that of their families as they are for their citizenship papers.

"There is huge flood water and strong current in the Brahmaputra. Water is entering the villages first and we are tasked with this challenging operation to evacuate people. When we go to bring them, almost everyone carries a bunch of papers, their NRC documents. People are ready to leave everything but not their NRC file" Parvesh Kumar revealed to NDTV.

Such is the fear villagers have of losing their documents that last week an NDRF rescue team had to send a diver inside a flooded hut in Laharighat to recover a man's NRC papers.

"He was crying inconsolably, thus we sent our diver and he got the bunch of documents which was in the plastic pouch" Kailash Sharma said.

Congress leader Rahul Gandhi today tweeted on floods that have affected states in North and North East India, writing in Hindi: "Thousands of Assam, Bihar, Uttar Pradesh, Tripura and Mizoram flooded the situation. Public life has been badly affected. I appeal to the Congress workers of all these states to take immediate action in the relief and rescue work of the common people."

The Assam government issued a red alert yesterday after floods displaced tens of thousands and cut off entire sections of the state. As many as 4,157 villages across 30 districts, including Dhemaji, Lakhimpur, Biswanath, Sonitpur, Darrang, Udalguri, Baksa, Barpeta, Nalbari, Chirang, Bongaigaon and Kokrajhar, were submerged as rain continued unabated. The number of dead also increased to 15, with four people losing their lives yesterday.