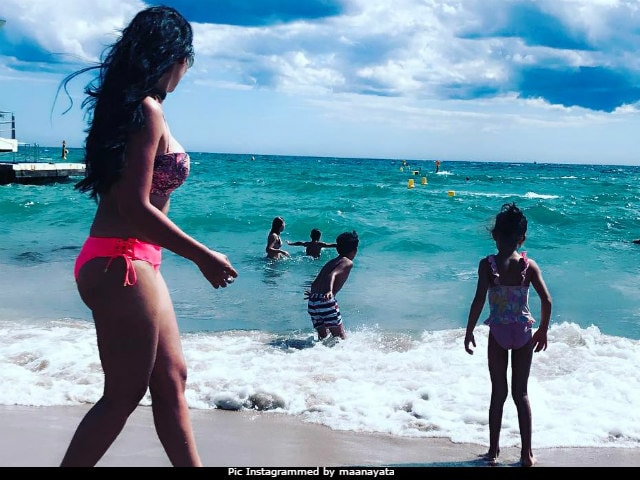 Maanyata and the twins are in the French Riviera (courtesy maanayata)

New Delhi: Sanjay Dutt's wife Maanyata and their twins - Shahraan and Iqra - are currently enjoying the sun, sand and sea in the French Riviera. Maanyata and the kids were previously joined by the 57-year-old actor for the never-ending Europe tour but he appears to have returned to his work commitments. Maanyata is logging their holiday with envy-inducing pictures on Instagram, which are closely being followed and loved by Trishala, Mr Dutt's 28-year-old daughter from his first marriage to Richa Sharma. Maanyata recently Instagrammed a photo of herself in a bikini and the kids on the beach, which was quickly reviewed by Trishala (who appears to have an unverified Instagram account). "Beautiful pic!! Looks like fun," she commented with flying-kiss emoticons. Sanjay Dutt married Maanyata in 2008 after divorcing model-actress Rhea Pillai. Mr Dutt was married to Richa Sharma from 1987 to 1996 and Rhea Pilliai from 1998 to 2005.

You can follow the Dutts' itinerary for the Europe tour, which was kicked off with visits to Rome and Italy earlier this month. Maanyata's holiday pictures prove that Shahraan and Iqra are also fans of globe-trotting just like their star parents. Maanyata remains busy Instagramming moments from their vacation while Shahraan and Iqra contribute substantially, photobombing every now and then. For a poolside picture, Iqra adorably roped in her father to photobomb Maanyata and Shahraan. Iqra's brother made up for it in another one, photobombing a uber-stylish pic of Maanyata in red swim-wear.

Trishala's Instagram profile often has posts featuring Sanjay Dutt. On Father's Day, Trishala wrote a heart-warming message for Mr Dutt on Instagram along with a throwback pic: "Although time and distance may separate us temporarily. Your guidance, advice, and love has stuck with me through it all. Thanks for acting like a kid when I was a kid, acting like a friend when I needed a friend, and acting like a parent when I needed a parent."

Meanwhile, Sanjay Dutt is awaiting the release of his comeback film Bhoomi, which is scheduled for September 22. Saheb Biwi Aur Gangster, Torbaaz and Munna Bhai 3 are also in the pipeline for him.
Comments
maanyatasanjay dutttrishala