US Diplomat On Religious Freedom Meets Dalai Lama At Dharamshala

Ambassador at Large for International Religious Freedom Sam Brownback began his trip in Dharamshala on October 28, where he delivered remarks alongside the Dalai Lama at the 60th anniversary celebration of the Tibetan Institute for the Performing Arts, it said. 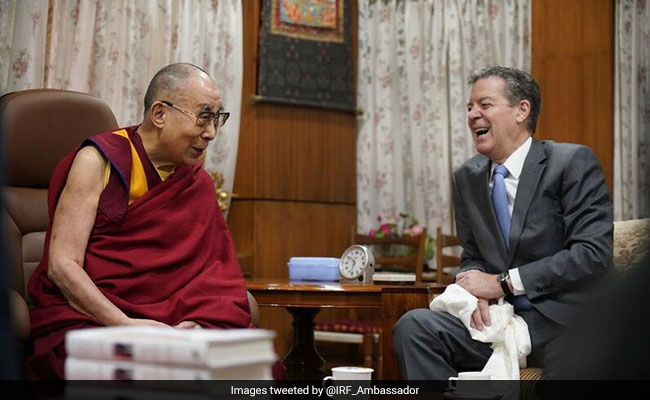 The Trump administration's point person for international religious freedom is on a visit to India and met Tibetan spiritual leader the Dalai Lama in Himachal Pradesh's Dharamshala on Monday, according to the US State Department.

Ambassador at Large for International Religious Freedom Sam Brownback began his trip in Dharamshala on October 28, where he delivered remarks alongside the Dalai Lama at the 60th anniversary celebration of the Tibetan Institute for the Performing Arts, it said.

Mr Brownback met the Dalai Lama and discussed with the 84-year-old religious leader ways to improve religious freedom for Tibetan Buddhists around the world.

"Inspired and deeply moved after my meeting with His Holiness Dalai Lama in India. He is living testament of the power of religious freedom to overcome hate, division, and intolerance. I'm stirred in my own faith to work harder for religious freedom for all, including Tibetans," the top American diplomat said in a tweet.

"Reminded today of the rich history of the Tibetans. They are a beacon of hope for religious freedom for all. They have not only endured but defied attacks by those who sought to revise, restrict, and erase their unique heritage. Today we stand in honour and celebration of them," he said in another tweet.

From Dharamshala, Mr Brownback would travel to New Delhi on October 29 for discussions on expanding US-India cooperation and shared global objectives, and to visit religious sites, including the Lotus Temple, the State Department said.

On November 1, Brownback will visit Nepal where he will meet with Nepali leaders, including in government and civil society, to discuss efforts to strengthen religious freedom in Nepal.

On November 2, he will make a final stop in Bangkok, Thailand, where he will deliver remarks at the 5th Annual Southeast Asia Freedom of Religion or Belief Conference.