Industrialist Anand Mahindra among those who congratulated the 26-year-old from Kerala for his feat. 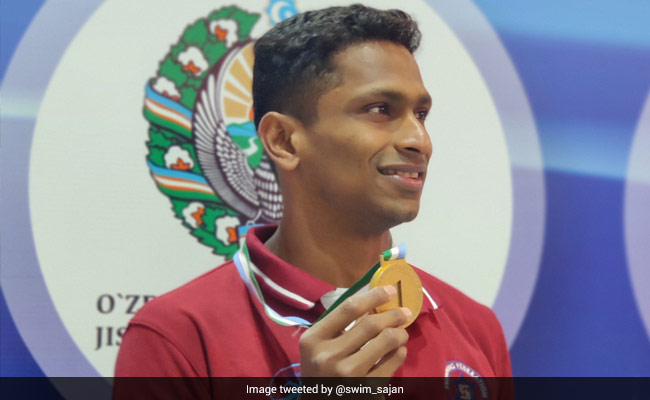 On Saturday, Sajan Prakash, a police officer from Kerala, became the first Indian swimmer to achieve the Olympic ‘A' qualification mark. Mr Prakash clocked an impressive 1:56.38 - 0.1 second less than the qualification standard - in the 200-metre butterfly event in Rome at the Setti Colli Trophy to automatically qualify for the Tokyo Olympics.

Kerala Police tweeted about the 26-year-old swimmer's achievement on its official handle and said that it was "a proud moment" for the country. What makes his achievement even more special is that over the past couple of years, Mr Prakash battled a slipped disc in the neck.

Sajan Prakash, Armed Police Inspector in Kerala Police, qualified for the Olympics with the A cut time 1.56.38 in 200m butterfly in Rome today. He becomes the first Indian swimmer to represent India, in the Olympics and to qualify with an A cut. A proud moment the country. pic.twitter.com/vWj61guusX

Even the Swimming Federation of India tweeted about Mr Prakash's feat on its official handle, calling it a “watershed moment in Indian swimming”, while also sharing a video of the qualification event.

For all the Indian swimming fans waiting to watch the watershed moment in Indian swimming .. Sajan Prakash 200 Butterfly Olympic A qualification time @KirenRijiju@Media_SAIhttps://t.co/t2OqaENFg2pic.twitter.com/ioxPhVBvJF

Among those who congratulated Mr Prakash was industrialist Anand Mahindra.

In his tweet, Mr Mahindra hoped that this signalled "a new era of participation by Indians in the top rungs of the sport". On a lighter note, Mr Mahindra added, "And I'm particularly envious. I've been swimming since childhood but still haven't mastered the rhythm of the Butterfly stroke! Anyone with some tips to make it easier?"

Amazing. Bravo Sajan! Hope this signals a new era of participation by Indians in the top rungs of the sport. And I'm particularly envious. I've been swimming since childhood but still haven't mastered the rhythm of the Butterfly stroke! Anyone with some tips to make it easier? https://t.co/opykBoIQ6V

There were other congratulatory messages as well. While one user, Sudhirr Nayar, wrote "go for the gold", another user, Nazar, said it was a "proud moment" for India as well as Kerala.

Amazing , what a proud moment for india , Kerala and congratulations ????

A few days, before Mr Prakash achieved the Olympic ‘A' qualification mark, actor Madhavan had tweeted, egging him on to make "that A cut which would make history for India”.

Congratulations ⁦@swim_sajan⁩ for breaking the Indian record in
200 butterfly once more,breaking the 1'57 barrier 4 the first time with 1'56.96, & getting REALLY close to that A cut which would make history for India.
Hearty congratulations to his home coach Pradeep Kumar. pic.twitter.com/jCq50upSh2

In a press release, Mr Prakash credited his coach Pradeep Kumar for his success. Mr Prakash said that it was the training sessions by Mr Kumar that helped him qualify for the Tokyo Games and said that the coach was his anchor. The pandemic that pushed the Olympics by a year also coincided with a period for Sajan where he faced injuries of the neck and the shoulder as well as intense training in the unforgiving Dubai summer.

A PTI report stated that this was Mr Prakash's second successive Olympics, having represented the country in the 2016 Rio Games.