Saif Ali Khan on Sara's debut: "I am very happy that she is doing something she is passionate about and it's a beautiful job" 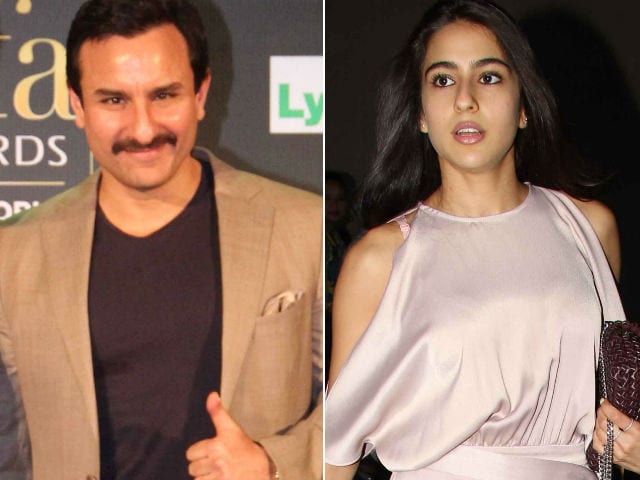 New Delhi: Actor Saif Ali Khan said that his recent interview, in which he said that no parent would want the life of an actor for their children, was 'twisted.' Saif's daughter Sara Ali Khan is debuting in Abhishek Kapoor's Kedarnath opposite Sushant Singh Rajput. The 46-year-old actor told Hindustan Times: "It's annoying when you give a nice interview and people pick up one line and talk about it, it's irritating. I support my daughter and I love her. I think her choice is great. Of course, she is an actress and she comes from a family of artistes. I am still a little concerned for her as it's an unsure profession. I love her so I worry for her."

Sara Ali Khan's debut film was an on-and-off trend on social media for a very long time. At first, there was a supposition that filmmaker Karan Johar was handling her launch and at that time Saif had said that he was 'pleased.' Sara's first rumoured debut was opposite Hrithik Roshan, 43, and later opposite Tiger Shroff in Student Of The Year 2. Then there were reports of Salman Khan launching Sara opposite his brother-in-law Aayush Sharma in one of his own projects.

All speculation about Sara's first film ended after her first film (Kedarnath) was announced (though unofficially). A few days after that, DNA quoted Saif as saying: "Why would she want that for herself? Look at where she studied. After having done that, why wouldn't she want to live and work in New York, rather than do this? I am not looking down on acting, it's just it is not the most stable profession. And everyone lives in constant fear. And there is no guarantee that despite doing your best, you will succeed. This is not the life, any parent would want for their children."

Folks believed that Saif Ali Khan, who was last seen in box office debacle Rangoon, was confused about how he felt about Sara's debut. As of now, Saif seems happy about the way things are going in Sara's career. Saif's only advice for his daughter is to read the script properly. "I think Sara is a very bright girl. She is well educated and has got a nice mind. She has a lot of well-wishers around her - from her mother (actress Amrita Singh) to me, Karan Johar to everybody. She can seek advice from anybody. I am very happy that she is doing something she is passionate about and it's a beautiful job," he told Hindustan Times.

Promoted
Listen to the latest songs, only on JioSaavn.com
Sara is the eldest of Saif Ali Khan and his ex-wife Amrita Singh's two children. Ibrahim Ali Khan Pataudi is her sibling while Taimur Ali Khan Pataudi (born to Saif and Kareena Kapoor in December) is her half-brother.

Saif Ali Khan is currently prepping for his next film, which is a remake of Jon Favreau's Chef.