Should Have Sacrificed Jaya Bachchan, Mayawati Message To Akhilesh Yadav

With 19 lawmakers, Mayawati's BSP had hoped to push through its candidate with surplus votes from the SP, Congress and a few Independents. 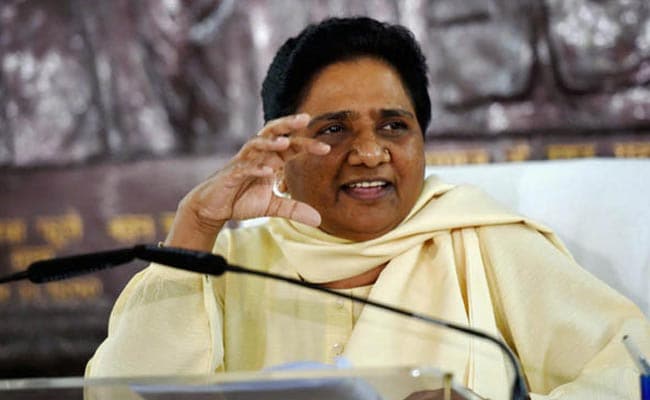 For now, Mayawati said her party's ties with the SP were intact (File)

New Delhi: Mayawati, chief of the Bahujan Samaj Party that lost out to the ruling BJP in Friday's Rajya Sabha elections, has promised to make the ruling party pay for the setback in the 2019 general elections. She said the BJP was desperate to defeat her candidate in the expectation that she would break up the nascent alliance with Akhilesh Yadav's party but underscored she was determined not to let this plan succeed.

She also sought to wipe the smile off the faces of BJP leaders who projected her candidate's defeat as revenge for the BJP's loss in the recent bypolls. "No matter how many laddoos they eat, they cannot make up for the shameful loss in Gorakhpur and Phulpur...That stain (on BJP's record) will remain," she said, a reference to Chief Minister Yogi Adityanath and other leaders celebrating the win before the cameras on Friday evening.

She said Akhilesh Yadav should have made "every sacrifice" to ensure BSP candidate Bhim Rao Ambedkar's win, particularly when the BJP was so determined to defeat him to engineer a rift between the BSP and SP.

This implies that she would have wanted Akhilesh Yadav to tell his lawmakers to ensure Mr Ambedkar's victory even if it meant that the SP's Jaya Bachchan lost in the process.

"Had I been in his place," Mayawati said, this is what she would have done. That would have been a message to the BJP which wouldn't have dared again to try to break the BSP-SP partnership. The BJP was sure to win 8 of the 10 seats up for election. The Samajwadi Party of Akhilesh Yadav had enough votes to get its one candidate through. For the final and tenth seat, it was Mayawati vs Amit Shah, because the BJP had put up a ninth candidate.

With 19 lawmakers, Mayawati's BSP had hoped to push through its candidate with surplus votes from the SP, Congress and a few Independents.

Just two weeks earlier, it was her party's support that had ensured the Samajwadi Party's a stunning victory in the Lok Sabha bypolls from Gorakhpur and Phulpur, two prestigious seats last held by Uttar Pradesh's chief minister and his deputy. As part of this arrangement, the SP was to help her candidate win the Rajya Sabha seat.

This time, the 67-year-old BSP president signalled that she was willing to overlook Akhilesh Yadav's slipups because unlike her, 44-year-old Akhilesh Yadav didn't have as much as experience in politics as she. But there was no effort to hide her disappointment.

She said the BSP candidate might even have won if Akhilesh Yadav had invested in consolidating BSP-SP votes rather than Raja Bhaiya, the independent lawmaker from Kunda she had jailed 16 years ago on terror charges.

Raja Bhaiya had turned up at Akhilesh Yadav's dinner ahead of polling and posed for photographs with him. But on Friday, he told reporters that he would vote for the SP, not Mayawati's party.

Shortly after Mayawati making public her disapproval, Akhilesh Yadav cancelled a function organised to celebrate Jaya Bachchan's victory, a sign that he had taken note of the advisories that she had issued.

For now, Mayawati said her party's ties with the SP were intact. BSP workers, however, would not go around canvassing for any candidate in any by-election before the general elections, she said.

But it was the BJP that had firmly remained the target of her attacks at the press conference.

Promoted
Listen to the latest songs, only on JioSaavn.com
"The BJP must be thinking that Mayawati is hot-headed and will break the alliance," she said, deviating from the detailed prepared statement that she read out.

"This conspiracy is going to cost you. You defeated our candidate but now, workers from both parties... will redouble efforts... to stop the BJP from returning to power in 2019," she warned.
Comments
MayawatiAkhilesh Yadav