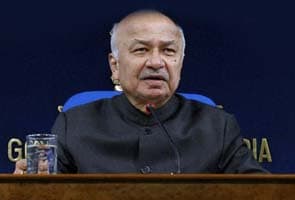 New Delhi: The opposition BJP today demanded that Home Minister Sushil Kumar Shinde be sacked for alleging that the BJP and its ideological parent, the RSS, promote terrorism at their camps. The Prime Minister and Congress president Sonia Gandhi must apologise for the insult, BJP spokesperson Ravi Shankar Prasad said.

"The BJP will not tolerate this repeated insult of Hindu and saffron traditions of India," said Mr Prasad. "He is a light-weight Home Minister making lightweight remarks, but since he spoke in the Prime Minister's presence, it has to be taken seriously," the spokesperson said, adding that since Mr Shinde is the Leader of the House, his comments could seriously damage the government's fragile relationship with the opposition in Parliament, which leads frequently to a complete gridlock.

But Parliamentary Affairs Minister Kamal Nath was unmoved. "The Congress fully backs Shinde... his statement is a fact," Mr Nath said, accusing the BJP of trying to divert attention from its "internal problems."

The Home Minister delivered a scaleable controversy yesterday when he said at a Congress meeting in Jaipur, "We have got an investigation report that be it the RSS or BJP, their training camps are promoting Hindu terrorism. We are keeping a strict vigil on all this."

The RSS said today that his comments have made the minister "a darling of terrorists." The RSS and the BJP say that the Home Minister's remarks allow Pakistan and terror groups based there to pass the buck for attacks in India. Underscoring their point, the mastermind of the 26/11 attacks in Mumbai, Hafiz Saeed, said today that the Home Minister has exposed the Indian "propaganda" of blaming Pakistani groups for strikes in India.

RSS spokesperson Ram Madhav tweeted this morning, "It is Shinde who is helping our enemies by such statements. Now even LeT (terror group Lashkar-e-Taiba) welcomed his statement I am told."

Right-wing extremist groups are being investigated for possible involvement in two terror attacks in the communally-sensitive town of Malegaon in Maharashtra in 2006 and 2008 and bomb blasts in 2007 on the Samjhauta Express, a train headed from Delhi to Pakistan, in which nearly 70 people were killed.
Comments
Sushil Kumar Shinde