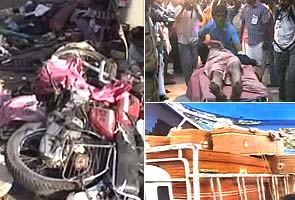 Thiruvananthapuram: The police in Kerala have said it cannot be held responsible for any aspect of the massive stampede near the Sabarimala temple. 102 people were killed in a stampede last week at Pullmedu in the Idukki district. (See pictures) The police says more than 200 policemen were on duty in the area, and the rescue operations that followed the stampede were impressive.

The Kerala High Court had asked the Forest Department, the police and the trust that manages the temple to explain what caused the tragedy. Initial reports suggested that an auto used by pilgrims collided with a jeep and that triggered panic which erupted into a stampede.

The Inspector-General of the Police in Ernakulam appeared in court to submit his department's report which asserts that the police followed all the regulations for the area.

The Travancore Devaswom Board that governs the temple said that it has repeatedly been denied permission to improve infrastructure and facilities for the millions of pilgrims that visit the Sabarimala temple.  It said because a part of the area is demarcated as a tiger reserve, the trust is restricted in its development work.  It highlights that the lane used by pilgrims to walk to and from the temple is narrow and that parking in the area is not regulated.

The High Court had earlier pulled up the government for a lack of coordination, which endangered the safety of Sabarimala devotees.
Comments
Kerala policeSabarimala accidentSabarimala stampedetemple stampedeTravancore Devaswom Board