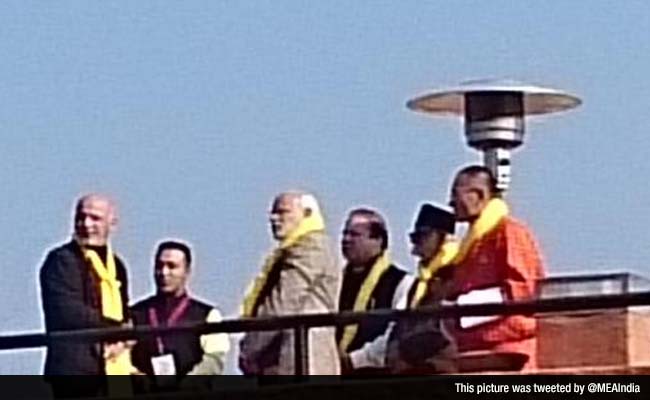 Kathmandu: Prime Minister Narendra Modi, his Pakistani counterpart Nawaz Sharif and other SAARC leaders spent time at an informal retreat outside Kathmandu on Thursday, on the sidelines of a summit that appears to have been derailed by Pakistan's refusal to endorse agreements backed by India.

PM Modi reportedly flew in an Indian Air Force chopper while other leaders were taken by Nepal Army helicopters to a resort in Dhulikhel for the retreat.

In images tweeted by the foreign ministry spokesperson, PM Modi was seen standing in a group that also included Mr Sharif.  He was also seen in conversation with Afghanistan President Ashraf Ghani.

PM Modi and Mr Sharif have shared frosty vibes since the summit began on Wednesday and did not even look at each other when they shared a dais.

The retreat was seen as a chance for other leaders to persuade Mr Sharif to change his mind on agreements that he has opposed, forcing the cancellation of a signing ceremony.

Pakistan has blocked key proposals to integrate energy grids and free up road and rail movement. Sources say SAARC nations are keen that at least the energy agreement is adopted, to avoid a total collapse of the summit.

The Pakistani premier will fly out of Nepal this evening, a little earlier than scheduled. He will miss a banquet and a meeting with the Nepal President.

Indian spokespersons have said they are disappointed with Pakistan's stalling of the deals.

In his address in the opening session of the two-day summit, PM Modi had bluntly said SAARC evoked cynicism and skepticism, and offered his suggestions to improve connectivity in the region. "As SAARC we have failed to move with the speed that our people expect and want. Nowhere in the world are collective efforts more urgent than in South Asia; and, nowhere else is it so modest," he said.

Promoted
Listen to the latest songs, only on JioSaavn.com
In its 30 years, SAARC or the South Asian Association for Regional Cooperation, has delivered negligible results for economic ties and development among its members - Afghanistan, Bangladesh, Bhutan, India, the Maldives, Nepal, Pakistan and Sri Lanka.

Despite a free trade pact since 2006, South Asian nations conduct only 5 per cent of their total trade with each other, and there are few transport and power links among them.
Comments
SAARC summitPM ModiNawaz Sharif