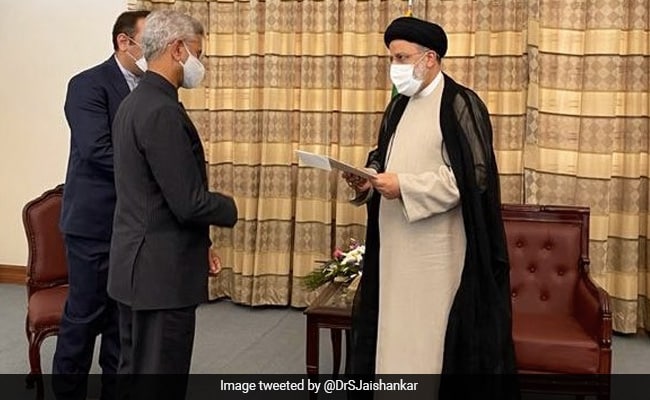 S Jaishankar called on President-elect Raisi during a stopover at the Iranian capital. (File)

The Ministry of External Affairs (MEA) announced that Mr Jaishankar will pay a two-day visit to Iran from Thursday, primarily to attend the swearing-in ceremony.

"At the invitation of the government of Iran, the external affairs minister will visit Iran on August 5 and 6 to attend the swearing-in ceremony of President-elect Ayatollah Sayyid Ebrahim Raisi on August 5," the MEA said in a statement.

"During his visit, the external affairs minister will call on the president and on the sidelines, will also meet other leaders," it added.

Raisi, a hardliner and known to be close to Iran's Supreme Leader Ayatollah Ali Khamenei, won the presidential election in June by a landslide.

Mr Jaishankar called on President-elect Raisi during a stopover at the Iranian capital on his way to Russia last month.

The external affairs minister also held extensive talks with his Iranian counterpart Javad Zarif in Tehran, covering a range of key issues including the fast-evolving situation in Afghanistan.

His visit to Tehran coincided with Iran hosting an intra-Afghan dialogue in the country.

Iran has been a key country for India in the Gulf region.

The two sides have been jointly focusing on improving connectivity between South East Asia and Central Asia.

Located in the Sistan-Balochistan province on energy-rich Iran's southern coast, the Chabahar port is being developed by India, Iran and Afghanistan to boost connectivity and trade ties.