Will Not Agree To Any Change In Status Quo: S Jaishankar On Eastern Ladakh Standoff

"We are absolutely clear that we will not agree to any change in the status quo. Any attempt to change the LAC unilaterally by one side," the External Affairs Minister said. 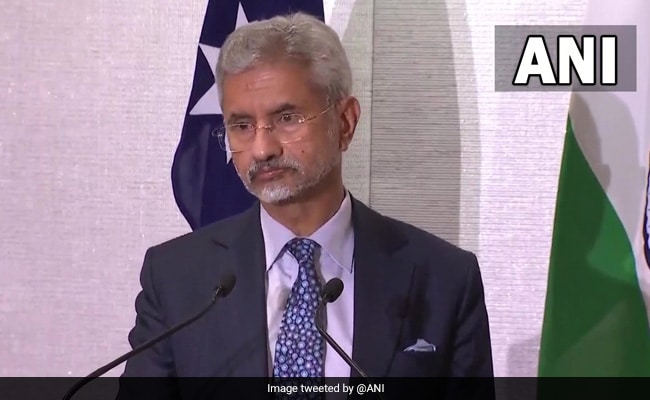 S Jaishankar arrived in Paris on Sunday on a three-day trip after paying a two-day visit to Germany.

India is engaged in talks with China on the eastern Ladakh border standoff with absolute clarity that it will not agree to any change in the status quo or any attempt to unilaterally alter the Line of Actual Control (LAC) in the region, External Affairs Minister S Jaishankar has said.

In an interactive session at a think-tank in Paris, Mr Jaishankar said he was optimistic about resolving the issue through dialogue and that significant headway has been made in many of the friction points following talks between military commanders of the two sides.

"We are absolutely clear that we will not agree to any change in the status quo. Any attempt to change the LAC unilaterally by one side. So however complex it is, however long it takes, however difficult it is, I think that clarity is what guides us," he said on Tuesday.

Mr Jaishankar said achieving disengagement is the goal right now and that he was optimistic about the resolution of the issues.

"We will carry on with this and disengagement is right now the goal. Because it is only when disengagement happens we can then start talking about de-escalation," he added.

Mr Jaishankar arrived in Paris on Sunday on a three-day trip after paying a two-day visit to Germany.

The external affairs minister said that both sides held several rounds of talks between military commanders with a focus on disengagement.

"As a result of that, we have made significant headway in many of the friction points. There are some frictions points that still remained to be resolved. It has its complexity because these are areas where there are claims and then there are various military considerations which become the subject of the conversation," he said.

The 14th round of military talks had taken place last month during which India pressed for an early disengagement of troops in the remaining friction points.

Mr Jaishankar asserted that India is approaching the matter with clarity.

"I am optimistic. I am optimistic temperamentally because if you are into diplomacy and negotiations, it is completely necessary that you are optimistic," he said.

The border standoff in eastern Ladakh erupted on May 5, 2020, following a violent clash in the Pangong lake area. The face-off escalated after the Galwan Valley clashes on June 15, 2020.

Following the clashes, both sides gradually enhanced their deployment by rushing in tens of thousands of soldiers as well as heavy weaponry.

As a result of a series of military and diplomatic talks, the two sides completed the disengagement process in Gogra as well as in the north and south banks of the Pangong lake last year.