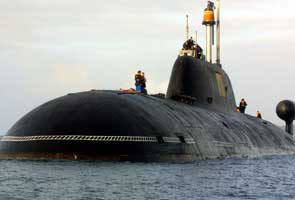 Moscow: Russia has handed over the much- awaited nuclear-powered attack submarine Nerpa to India on a 10-year lease, boosting the Indian navy's fire-power.

"The signing ceremony happened yesterday at the Bolshoi Kamen ship building facility in the (Far East) Primorye region where the Nerpa is now based," ITAR-TASS news agency quoted a senior Russian navy official as saying.

The deal for the submarine, which is being transferred on a 10-year lease, was worth USD 920 million.

The report said an Indian crew would sail the Akula II class craft to its home base at the end of January.

"All of the naval tests and performance checks have been completed," the Russian navy official said.

The submarine, capable of remaining underwater for months, will be rechristened as 'INS Chakra' and it would be for the first time in more than two decades that the Indian navy would have a nuclear attack submarine.

When Russia makes the delivery, it will make India only the sixth operator of nuclear submarines in the world.

The submarine deal had figured during Prime Minister Manmohan Singh's visit to Russia earlier this month.

The Nerpa, an Akula II-class attack submarine, had originally been scheduled for delivery in 2008 but an accident during sea trials on November 8 that year had forced the Russian authorities to put it on hold.

Twenty people, mostly civilians, had been killed when a fire-suppressant gas was released on the Nerpa during shakedown trials, in one of Russia's worst naval accidents.

The Akula-II class submarines are equipped with 28 nuclear-capable cruise missiles with a striking range of 3,000 km. The Indian version is reportedly expected to be armed with the 300-km Club nuclear-capable missiles.

Promoted
Listen to the latest songs, only on JioSaavn.com
India had funded the completion of the Nerpa nuclear submarine at Amur Shipyard before the collapse of the Soviet Union in 1991