Samajwadi Party chief Akhilesh Yadav was among those who took a swipe at the UP Chief Minister on Twitter.

ANI has tweeted a fresh five-minute bite of Yogi Adityanath.

Yogi Adityanath's media adviser has shared a "fact-check" that claims a viral video of the Uttar Pradesh Chief Minister allegedly using a swear word against a news agency cameraperson was edited and fake audio was inserted into its last few seconds.

Samajwadi Party chief Akhilesh Yadav was among those who took a swipe at the UP Chief Minister on twitter. He tweeted a verse in Hindi, loosely translated as: "Please hear the sweet words from 'manyavar' to journalists. But use headphones and get away from children." He did not share the video, however.

The video, shared by other Twitter users, cuts off abruptly after Yogi Adityanath appears to use an expletive at a cameraperson of news agency ANI. The Chief Minister was speaking right after taking the first shot of Covid vaccine this morning and thanking the Union Health Ministry and scientists of the country.

As the video was viewed by more and more online, the Chief Minister's media adviser Shalabh Mani Tripathi retweeted a 'fact check' report by a website called "Breaking Tube" that claimed the last three seconds of the clip, when the Chief Minister appears to blurt out the abuse, was doctored. 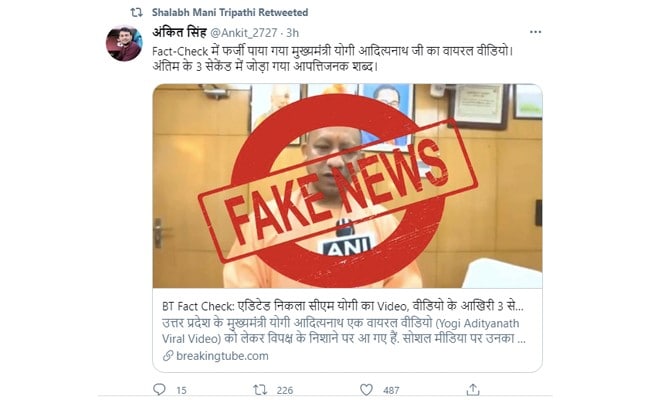 There are no details on the fact-check in the  report, which says the Chief Minister has ordered action against those who have circulated a "fake" video of him.

Video byte of UP CM Yogi Adityanath on Covid vaccination

The video first emerged in a tweet by retired IAS officer Surya Pratap Singh. "This is Chief Minister Yogi Adityanath's real face…Listen to the language of a saint," the tweet in Hindi read.

Videos later emerged of the morning telecasts of at least two regional channels in UP, in which the Chief Minister was heard swearing when his comment was being played out live.

"It Was Not Sudden", Says Kapil Sibal To NDTV On Quitting Congress: Highlights