Robert Vadra called Priyanka Gandhi's "arrest" unconstitutional and called on the Yogi Adityanath-led government to "let democracy be a democracy and not a dictatorship". 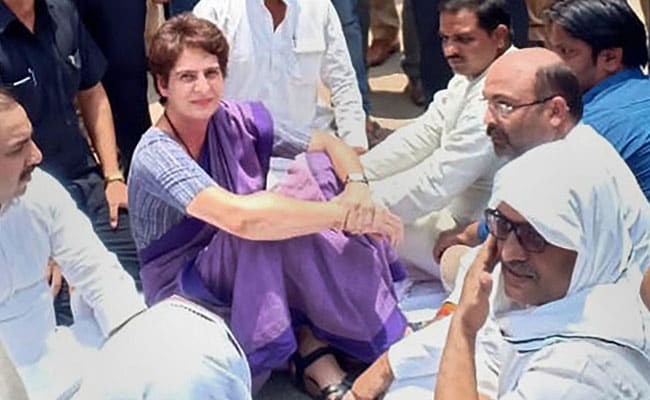 After a brief sit-in protest, Priyanka Gandhi was taken to a government guest house in Mirzapur.

After Congress leader Priyanka Gandhi Vadra was stopped by police in Uttar Pradesh on her way to meet the families of 10 tribals killed earlier this week, her husband Robert Vadra came out in support.

In a Facebook post, Mr Vadra called Priyanka Gandhi's "arrest" unconstitutional. "The way my wife & congress leader, Priyanka has been arrested, is completely unconstitutional. No documents were produced for the arrest," he said.

"This is a complete abuse of law in every respect. Is it a crime to visit the family of the deceased? Does this government wants (sic.) to suppress every voice that sides (with) the truth," he said.

Mr Vadra also called on the Yogi Adityanath-led government to "let democracy be a democracy and not a dictatorship".

Priyanka Gandhi was on her way to a village in Sonbhadra to meet the families of those killed earlier this week in a land dispute. Her convoy was blocked by police who said her visit could inflame tensions. After a brief sit-in protest, she was taken to a government guest house in Mirzapur. "I only wanted to go to Sonbhadra so that people there don't feel alone. I have been arrested and brought here but I will not leave this place till I meet with the families," she told her party workers.

Priyanka Gandhi, the Congress in-charge of eastern UP, is still at the guest house and has refused to leave without meeting the families. "No one can stop me from standing in support of the victims," she tweeted today.

Her brother and Congress leader Rahul Gandhi too called her "detention" disturbing. "The illegal arrest of Priyanka in Sonbhadra, UP, is disturbing. This arbitrary application of power, to prevent her from meeting families of the 10 Adivasi farmers brutally gunned down for refusing to vacate their own land, reveals the BJP government's increasing insecurity in UP," he tweeted.

Ten people were killed and over 24 injured on Wednesday when a village chief, Yagya Dutt, and his associates, fired on a group of tribal farmers who had refused to give up 36 acres of land they had tilled for generations. Witnesses said Yagya Dutt had brought nearly 200 men on 32 tractor trolleys to seize the land. The men fired at the tribals for over half-an-hour in one of the most chilling incidents the country has seen in recent times.

Police have arrested 24 people till now and a total of 78 people have been charged, including the village head and his brother.