Access to the main stage where leaders of the farmers' movement addressed the crowds was cut off at Singhu border near Delhi. 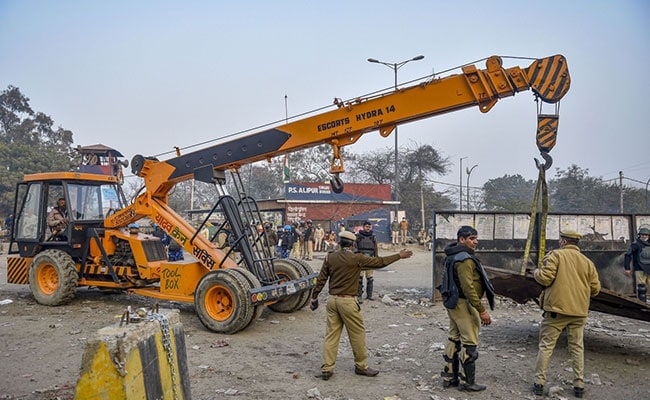 Roadblocks were put up at Singhu border near Delhi, the biggest camp of protesting farmers.

The Singhu border near Delhi remained tense for most of Thursday as the police brought in earthmovers to block several roads in the area and right-wing activists raised slogans against the tens of thousands of farmers camping there since November.

Two days after sections of the farmers' massive Republic Day tractor parade went rogue and triggered violence in central Delhi, more security forces, including riot police, were brought in at the camp.

Access to the main stage where leaders of the farmers' movement addressed the crowds was cut off and the Delhi Police and the Central Armed Police Force (CAPF) conducted mock security drills.

Police sources called it a routine security deployment suggested any action will only be taken after the farmer leaders respond to the notices sent over Tuesday's violence.

The protesting farmers, whose leaders have been given three days to respond, took out a march in the area.

Around 1 pm, about 100 people from right-wing groups reached the protest site shouting slogans against the farmers. Some of them claimed to be residents of neighbouring villages.

"We will not tolerate the insult of the tricolour. We want the border vacated. We are from the Hindu Seva Sangh," one demonstrator told NDTV.

The situation was defused when elder farmers intervened with folded hands.

Authorities in Singhu, which is a border crossing between Delhi and Haryana, have not yet given out an ultimatum like their counterparts in Uttar Pradesh.

At Ghazipur, another of the three sites of the farmers' sit-in, the UP police have cut off their water supply and asked protesters to vacate the area by Thursday.

The violence during the tractor rally was a major embarrassment for the government, but also for the 42 unions representing the farmers, who have mostly condemned the violence.

The clashes, which left one protester dead and dozens injured, marked a discernible shift in the mood at the protest sites and the approach of the police.

The farmers who have held their ground through eleven unsuccessful rounds of talks with the government, demanding a total repeal of the three laws that they say will result in loss of income, are now finding themselves on the backfoot.