On Tuesday, a mob of protesters drove their tractors into the Red Fort complex, many armed with swords and sticks, and ran amok. They planted the "Nishan Sahib" or Sikh religious flag and chased and assaulted policemen, who were outnumbered. 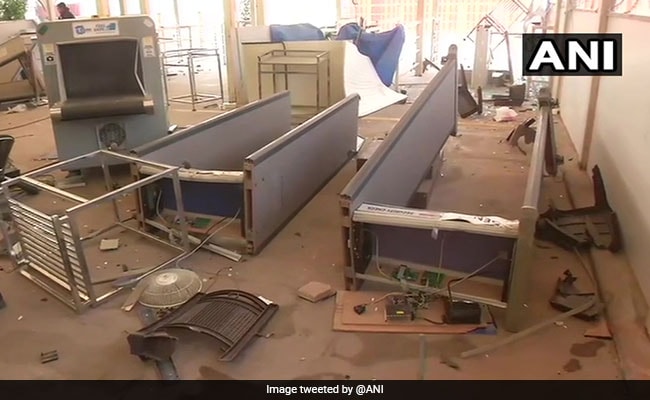 A vandalised metal detector at the premises of Red Fort.

The violence at Delhi's Red Fort by protesting farmers during a tractor rally on Republic Day caused much damage to the 400-year-old monument, a union minister said today.

On Tuesday, a mob of protesters drove their tractors into the Red Fort complex, many armed with swords and sticks, and ran amok. They planted the "Nishan Sahib" or Sikh religious flag and chased and assaulted policemen, who were outnumbered.

Prahlad Patel, the central minister for Culture and Tourism, said a report on the damage had been handed over to the Home Ministry and the Archeological Survey of India (ASI) would file a First Information Report on the damage. Mr Patel said the ticket counter had been destroyed, the Lahori Gate was vandalized and lights were broken.

"The biggest loss is at the most high security area, where the Prime Minister unfurls the national flag, where some structures on a minar are missing," he said. Three finials or curved structures on a gable were missing; one was found later.

"We can assess the financial damage of lights and the ticket counter but you cannot put a price on archeological remains. Those are priceless."

Videos of the clashes show protesters running wild in the complex, striking objects with sticks and even throwing stones at the police.

CCTV cameras, metal detectors, glass windows and security equipment at the entrance of the Red Fort were also smashed.

One video showed farmers breaking down a boundary wall at the complex.

The police have filed multiple cases since Tuesday and are scanning footage to track down who hoisted the Sikh religious flag at Red Fort, which the government said was an outrage India could not forgive.

"Not Consulted By Opposition": Mayawati Backs Droupadi Murmu For President