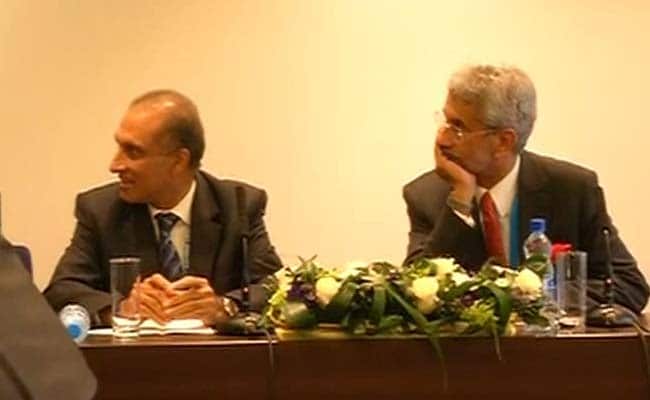 The foreign seretaries of India and Pakistan at a briefing on the bilateral meeting between the Prime Ministers of the two countries in Russia's Ufa.

Ufa, Russia: The Foreign Secretaries of India and Pakistan, S Jaishankar and Aizaz Ahmad Chaudhry, issued a joint statement in the Russian city of Ufa, after a bilateral meeting between Prime Ministers Narendra Modi and Nawaz Sharif. The meeting took place on the sidelines of the BRICS and Shanghai Cooperation Oorganisation summits.

Here is the full text of the joint statement issued by the Foreign Secretaries of India and Pakistan:

The Prime Ministers of Pakistan and India met today on the sidelines of the SCO Summit in Ufa.The meeting was held in a cordial atmosphere.The two leaders exchanged views on issues of bilateral and regional interest.

They agreed that India and Pakistan have a collective responsibility to ensure peace and promote development.To do so, they are prepared to discuss all outstanding issues.

Both leaders condemned terrorism in all its forms and agreed to cooperate with each other to eliminate this menace from South Asia.

They also agreed on the following steps to be taken by the two sides:

1.    A meeting in New Delhi between the two NSAs to discuss all issues connected to terrorism.
2.    Early meetings of DG BSF and DG Pakistan Rangers followed by that of DGMOs.
3.    Decision for release of fishermen in each other's custody, along with their boats, within a period of 15 days.
4.    Mechanism for facilitating religious tourism.
5.    Both sides agreed to discuss ways and means to expedite the Mumbai case trial, including additional information like providing voice samples.