At Bengaluru Krishi Mela, This Rare Breed Of Bull Is Main Attraction

The rare breed of the bull is known as the mother breed in Southern India and is perishing. There is a demand for Krishna's semen, said the bull owner

A Hallikar breed bull named Krishna is one of the main attractions at the Krishi Mela 2021 in Bengaluru and its semen is in great demand.

The rare breed of the bull is known as the mother breed in Southern India and is perishing.

"Krishna is a 3.5-year old Hallikar breed. Nowadays Hallikar breed is perishing. Hallikar is the mother breed for all the country breeds. We have set up a semen bank of the Hallikar breed. Where we sell one semen stick for Rs1,000," Boregowda, a bull owner, told ANI.

"As per my knowledge, nobody has done a semen bank of Hallikar breed in Malvalli in Mandya district. We privately did it. Monthly 8 times we draw semen from Krishna. We make 300 sticks at a time. Monthly it can give Rs 24 lakh worth of semen," he added. 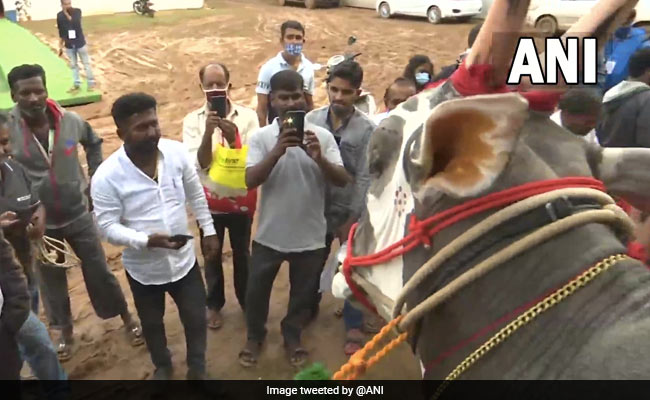 One semen stick of the bull is selling for Rs 1,000

"We have made a semen point in other districts like Davanagere, Ramanagara, Chickmagalur etc and we are opening one in Dasarahalli in Bengaluru as well. Farmers who want to buy semen of the Hallikar breed can buy it at nearby points," he stated.

"Krishna weighs around 1 ton. There is a demand for Krishna's semen," he added.

Somashekar, a visitor, told ANI, " it a very rare to see such kinds of bulls. Almost all the visitors liked Krishna".