Yadav, Khan and Bhim Army chief Chandrashekhar Azad appeared together on the dais seeking votes for the SP candidate in Rampur ahead of the December 5 bypoll. 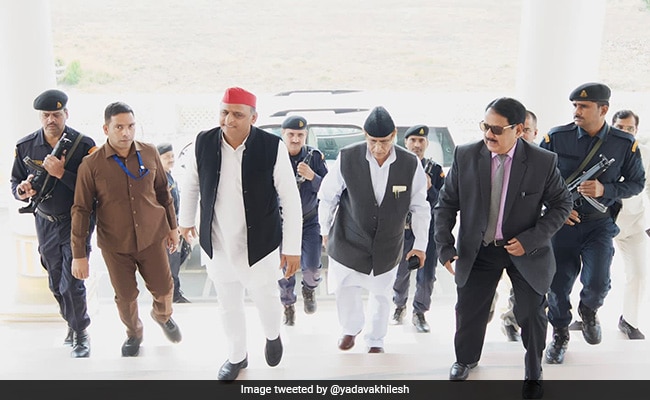 Samajwadi Party chief Akhilesh Yadav on Thursday accused the Uttar Pradesh's BJP government of "harassing" senior leader Azam Khan through "fake cases" and claimed that when he headed the state, he had refrained from taking any action against the current CM.

Yadav, Khan and Bhim Army chief Chandrashekhar Azad appeared together on the dais seeking votes for the SP candidate in Rampur ahead of the December 5 bypoll.

Yadav appealed to the people to vote against the "injustices" meted out to senior party leader Khan.

"No one is more powerful than time. Those who are doing atrocities, I want to tell them that a file of the current chief minister was presented before me (as CM) but we are Samajwadis and we neither practice politics of hatred nor harass others," Yadav said.

"I had returned the file (against Adityanath)... If you don't trust me, ask the officers," he said, without taking any names.

"Don't force us to become heartless because when we form the government, we too can initiate the same action against you," Yadav said.

Yadav served as the chief minister of Uttar Pradesh from 2012-17 and was succeeded by Adityanath.

Besides the Mainpuri Parliamentary seat from where his wife Dimple Yadav is contesting, bypolls are scheduled in Rampur and Khatauli assembly seats on December 5.

Stating that the Rampur bypoll was not of just one assembly constituency, Yadav said, "You get us this seat and you will see that in 2024, the BJP will not be able to save its government." "This election is not of Rampur alone. It is the election to bring the (SP) back in power (in future). This is the election for the injustices meted out to Azam Khan.

"There is SP on one side and on the other side there are those who do injustice, humiliate and lodge fake cases," he said.

Yadav claimed the two deputy CMs -- Keshav Prasad Maurya and Brajesh Pathak -- wanted to become the chief minister, and offered to support them in this if they joined the SP along with 100 BJP MLAs.

"What is the use of holding the deputy CM position when you cannot even transfer a chief medical officer... I offer you to become CM, SP MLAs are there," he said.

The SP has declared Asim Raza as the party contender in the bypoll for Rampur that was necessitated following the disqualification of Khan after he was convicted by a local court and awarded three years' imprisonment in a hate speech case.

The BJP has chosen Khan's detractor Akash Saxena as its candidate.

Though the outcome of the election would not have any impact on the state government which enjoys an overwhelming majority, the stakes are high for Khan to safeguard his prestige in Rampur where his influence reined supreme for nearly five decades.

The BJP has already won the Rampur Lok Sabha seat vacated by Khan and a loss in the bypoll would further deal a blow to his political clout.

In his speech, Khan narrated his woes inside jail and appealed to the people to vote for the party which was fighting for their cause and against the government's "atrocities".