"Wait For Some Time": Rajnath Singh On Ram Temple Demand In BJP Meet

The Ram Temple issue raised by the party's Ghosi MP Hari Narayan Rajbhar was supported by Salempur parliamentarian Ravindra Kushwaha while other lawmakers present in the meeting clapped in support of the demand. 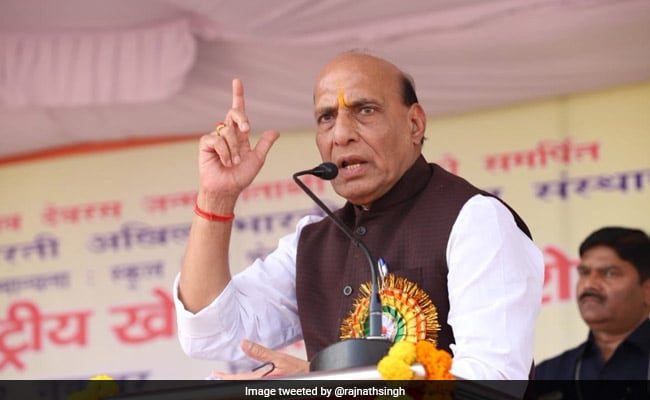 Rajnath Singh had presided over the meeting. (File)

The Ram temple issue echoed at a meeting of the BJP parliamentary party with a Uttar Pradesh lawmaker demanding enactment of a law for its early construction while Union Home Minister Rajnath Singh advised him to keep patience.

The issue raised by the party's Ghosi MP Hari Narayan Rajbhar was supported by Salempur parliamentarian Ravindra Kushwaha while other lawmakers present in the meeting clapped in support of the demand.

"Thoda intezar kijiye (wait for some time)," Mr Singh said in his response.

Mr Rajbhar said this is an issue of faith and needs to be addressed at the earliest and the best way to do it is by enacting a law in Parliament.

The demand for legislation to construct Ram temple in Ayodhya grew after the Supreme Court adjourned the Ram Mandir-Babri Masjid dispute hearing to January 2019.

RSS chief Mohan Bhagwat on many occasions has spoken in its favour and demanded an appropriate and requisite law for early construction of the Ram temple in Ayodhya. The VHP and Hindu priests, too, have been pressuring the government for an ordinance or law.

Neither PM Modi nor BJP chief Amit Shah was present in the meeting.

Sources said that Rajnath Singh asked the BJP lawmakers to work hard for the party's victory in the 2019 Lok Sabha elections and said that the opposition party had no leader to match PM Modi's popularity.