At Mega Delhi Rally For Ram Temple, RSS Man Targets "Those In Power"

The right-wing group Vishwa Hindu Parishad, or VHP, which is organising the Delhi rally, claims more than 1.5 lakh people are attending it

Ramlila Maidan rally: People turn up to participate at the rally organised by VHP in Delhi

A huge right-wing rally to demand the fast-tracking of the Ram temple at Ayodhya is being held at Delhi's Ramlila grounds today. The attending groups, which include the BJP's ideological mentor, the Rashtriya Swayamsevak Sangh, want the government to pass an ordinance or executive order to bypass the legal process in the coming session of parliament. The winter session of parliament -- the last full-fledged one before the Lok Sabha polls are announced -- begins on Tuesday.

"Those in power today had promised to construct Ram Temple. They should listen to people and fulfill the demand of temple in Ayodhya. They are aware of the sentiments," he said. "We are not begging for it. We are expressing our emotions. The country wants 'Ram rajya'," he added.

RSS chief Mohan Bhagwat had initially raised the demand of an "appropriate and requisite" law to facilitate the building of the Ram temple. Later, as the Supreme Court, where the Ayodhya title suit is pending, refused to grant a speedy verdict, the call for an ordinance grew louder. 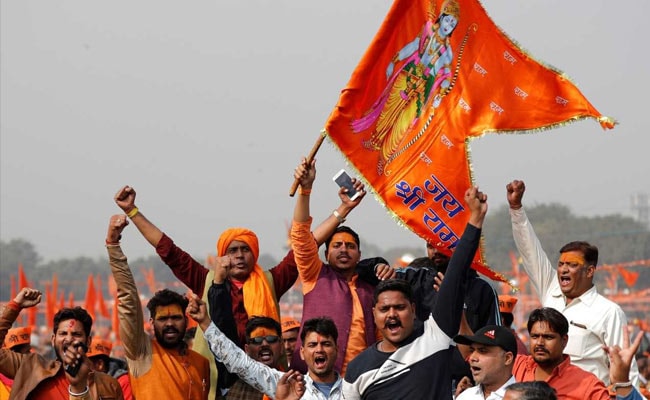 In January, the judges are expected to name a date to begin the hearing. But with the temple on hold for more than 25 years, the right-wing groups say they have waited long enough.

Allies like the Shiv Sena have alleged that the BJP is using the temple issue as an election gimmick -- a view that the opposition also holds. At a public meeting in Ayodhya last month, which coincided with a VHP rally there, Sena chief Uddhav Thackeray warned the BJP that they would not remain in power if they don't start the temple building process.

Chaos broke out at the grounds outside the iconic Red Fort today as thousands of people tried to enter the Ramlila grounds. As the police, fearing a stampede, shut the gates to the grounds, the crowd tried to force them open. A cordon of policemen could be seen physically holding the doors together. The right-wing group Vishwa Hindu Parishad, or VHP, which organized the rally, said they were expecting more than 1.5 lakh people. Supporters were brought in from various districts of Uttar Pradesh close to Delhi, including Ghaziabad, Gautam Budh Nagar, Baghpat and Meerut.

The VHP started their mass mobilization programme last month with a rally in Ayodhya. One of the religious leaders attending it, Swami Rambhadracharya, said a Union minister has assured him that a decision on the temple will be taken by Prime Minister Narendra Modi and his ministers after December 11. The next rally will be held in Ahmedabad.