"This Is Our Faith": Rajnath Singh Amid Jibes Over Rafale 'Shastra Puja'

Defence Minister Rajnath Singh said seven Rafale jets will arrive in India by April or May. The aircraft is capable of reaching up to the speed of 1800 kmph. 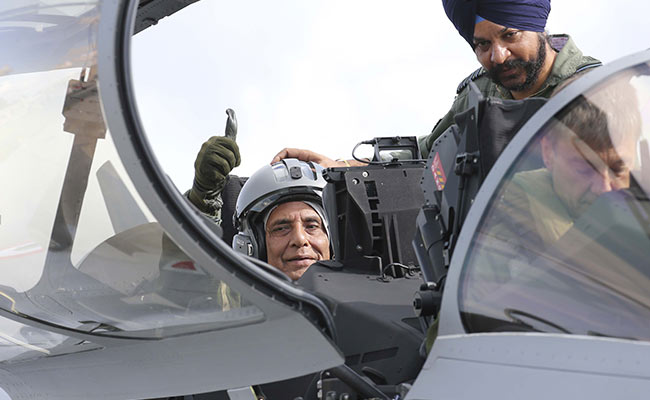 The Defence Minister was in France for the official handover of the first Rafale aircraft.

Defence Minister Rajnath Singh, who arrived in Delhi from France on Thursday night, said that seven Rafale fighter jets will arrive in India by April or May next year.

The Defence Minister was in France for the official handover of the first Rafale aircraft.

"Seven Rafale jets will arrive in India by April or May. The aircraft is capable of reaching up to the speed of 1800 kmph. I flew in a Rafale jet at the speed of 1,300 kmph. The credit for the successful acquisition of the jets goes to Prime Minister Narendra Modi," Rajnath Singh said.

He said that the France visit was a success and that he also held a meeting with French President Emmanuel Macron for over 35 minutes.

Responding to the Opposition's criticism over performing of "Shastra puja", the defence minister said: "People can say whatever they want. I did what I thought was right and I will continue to do so. This is our faith, that there is a superpower and I have believed it since childhood."

"People from all religions have the right to pray according to their beliefs. I would not have objected if someone else had done the same. I feel there must have been a difference of opinion over the issue in Congress as well, it would not have been everybody's opinion," he said.

Mr Singh also said that India does not intend to intimidate anyone by increasing its defence capabilities.

"After induction of Rafale fighter aircraft, the combat capability of the Indian Air Force will increase. We don't want to intimidate anyone by doing so. We will neither fear anyone nor will we intimidate," the Defence Minister said.

He said that some IAF officers were undergoing training in France to operate the aircraft.