In the picture, Govinda can be seen standing with Amitabh Bachchan and Rajinikanth. The 53-year-old actor seems to be lost in a deep thought 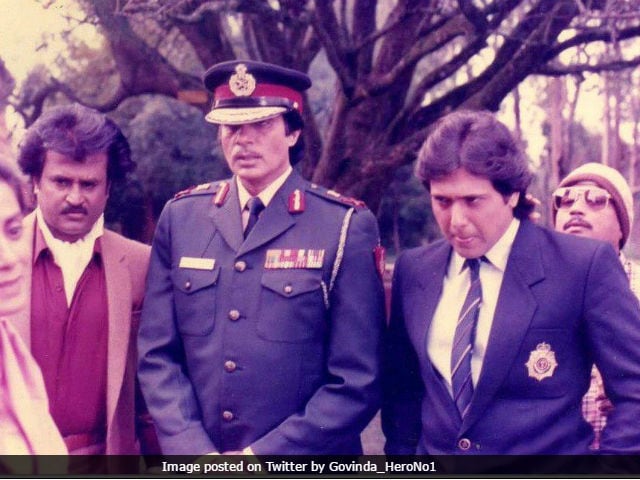 New Delhi: Actor Govinda delighted his fans and followers on Twitter today by sharing a nostalgic picture from the sets of his 1991 movie Hum. In the picture, Govinda can be seen standing with Amitabh Bachchan and Rajinikanth. The 53-year-old actor seems to be lost in a deep thought. Govinda captioned the wonderful picture as: "Wonder what was I thinking." Hum, directed by Mukul S Anand, was Big B's most successful film in the early nineties. Hum was the fourth highest grossing Hindi film of 1991 at the box office. The film earned Amitabh Bachchan the Filmfare Award for Best Actor (1992).

Wonder what was I thinking #tbtpic.twitter.com/TPjSm6rTKL

Govinda and Amitabh Bachchan have co-starred in the 1998 movie Bade Miyan Chote Miyan .

Govinda co-starred with superstar Rajinikanth in the 1988 movie Gair Kaanooni.

Govinda made his acting debut with 1986 movie Ilzaam. In a career spanning more than three decades, he has featured in over 165 Hindi films.

Govinda's career had a setback during the early 2000s. The Banarasi Babu took a break from films from 2003 to 2005 and returned to the big screen with 2006 movie Bhagam Bhag, co-starring Akshay Kumar and Paresh Rawal.

Govinda will next be seen in Ranbir Kapoor and Katrina Kaif's much-awaited film Jagga Jasoos. He will be portraying the role Ranbir's foster father in the film.