"Rahul Gandhi did not say anything about the CAA and the NRC in his speech and what he said was untrue," said state BJP president Satish Poonia. 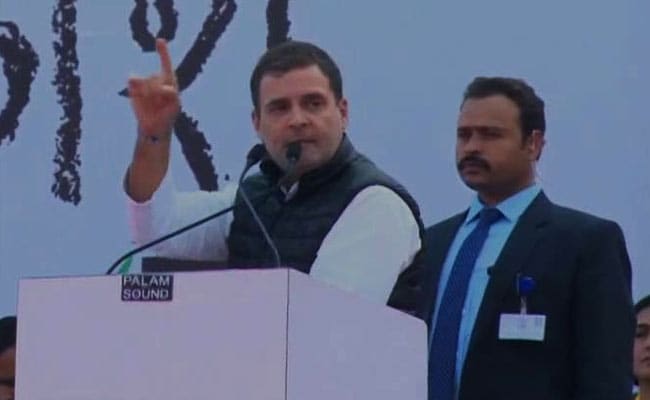 Rahul Gandhi did not mention promises made to farmers, Satish Poonia said

The Rajasthan BJP on Tuesday termed Rahul Gandhi's rally in Jaipur a "flop show" and also picked on the apparent omission of the CAA in his speech.

"Rahul Gandhi did not say anything about the CAA and the NRC in his speech and what he said was untrue. The rally was more of a drama and full of humour," said state BJP president Satish Poonia.

Mr Gandhi did not make any direct reference to the Citizenship Amendment Act and the National Register of Citizens in his ''Yuva Aakrosh Rally''.

But he had accused Prime Minister Narendra Modi of talking about them in his speeches instead of mentioning "real issues" like unemployment.

Mr Poonia also accused the government of forcing employees of trade unions and students to participate in the rally.

"There was neither any youth nor outrage (aakrosh)," he said.

Responding to Rahul Gandhi's remark that India was known as the rape capital, Mr Poonia said Rajasthan under the Congress government had become one of the leading crime-ridden states in India as per the NCRB report.

The highest number of crimes against women have occurred in the Congress tenure and the state ranks second in rape cases, he said.

He further said Rahul Gandhi did not mention promises made to farmers and the loss they suffered due to the locust attack.

Unemployment allowance and law and order problems were also not part of his speech, the BJP chief said.

Former Chief Minister Vasundhara Raje too tweeted, "It is ridiculous that Rahul Gandhi during his speech in the rally in Jaipur thanks those who decorated the stage. He praised the music band but he could not show any achievement of the Congress government in the state."

Deputy Leader of Opposition in the Legislative Assembly Rajendra Rathore termed the rally a "flop show", saying it is regrettable Rahul Gandhi could not announce any programme for Rajasthan.

Former Minister of State for Education Vasudev Devnani termed the rally a complete failure, saying that the youth of the state have rejected Rahul Gandhi and the Youth Congress outrightly.