The train previously called the New Delhi-Ludhiana Intercity will ply from Delhi to Lohian Khas in Jalandhar via holy city Sultanpur Lodhi. 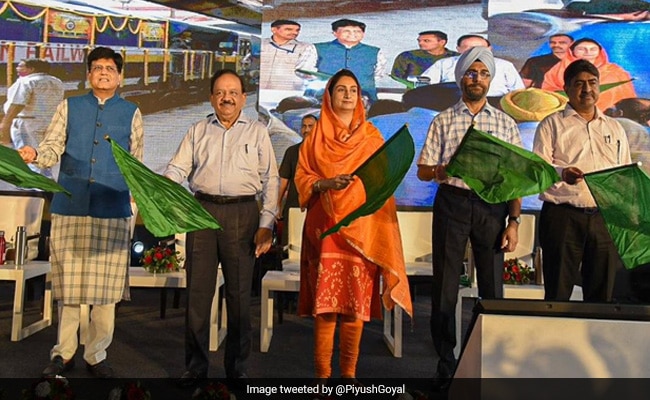 Piyush Goyal said renaming of this train is an initiative to follow a path shown by Guru Nanak.

The train previously called the New Delhi-Ludhiana Intercity will ply from Delhi to Lohian Khas in Jalandhar via holy city Sultanpur Lodhi.

Present at the flag off ceremony were Union Ministers Harsh Vardhan and Harsimrat Kaur Badal.

The request to rename the train was made by Union Food Processing Industries Minister Ms Badal on the occasion of the 550th Parkash Purb celebrations of Guru Nanak Dev.

"Just yesterday, we have added a Vande India train which will take devotees to Maa Vaishno Devi, and today this train will take pilgrims to Sultanpur Lodhi. There can be nothing more pious that the railways connecting places of religious worship," said Mr Goyal.

Ms Badal thanked the railway minister for agreeing to her proposal and said that it was a sentimental issue for the people of Punjab.

"''Sarbat Da Bhala or Blessings for All'' formed the essence of Guru Nanak Dev's teachings. It will be the most appropriate to rename the train as such," she said.

"It is a historic moment for Sikhs. I congratulate Piyush Goyal for accepting my request of renaming the train. In Sultanpur Lodhi, Nanak Ji spent 14 years of his life and taught that all communities are one. No Hindu no Muslim, only Ek Omkar," the Bathinda MP said.

The Health minster Harsh Vardhan said that the train was a gift for Delhiites.

"This train will have blessings of Guru Nanak Ji. It is a gift for Delhiites and countrymen. Also, a 6-metre skywalk is being constructed to connect New Delhi station to airport metro and yellow line," he said.

Terming Guru Nanak as a messenger of peace, Mr Goyal said that the joy and celebrations to participate in the 550th anniversary of Guru Nanak on November 12, is unimaginable.

"Renaming of this train is an initiative to follow a path shown by Nanak Ji. We all should imbibe his teachings in life," he added.

The train was flagged off from New Delhi Railway Station on Friday at 6.30 am and it would reach Sultanpur Lodhi at 2.38 PM.

Ms Badal said that Rs 22 crore was sanctioned by the railway ministry to upgrade Sultanpur Lodhi railway station and to launch 14 new trains so that people from various parts of Punjab can go there as there are seven sacred places.

She also thanked Prime Minister Narendra Modi for taking up the Kartarpur Corridor initiative and fulfilling the 70-year-old dream of Sikh community.