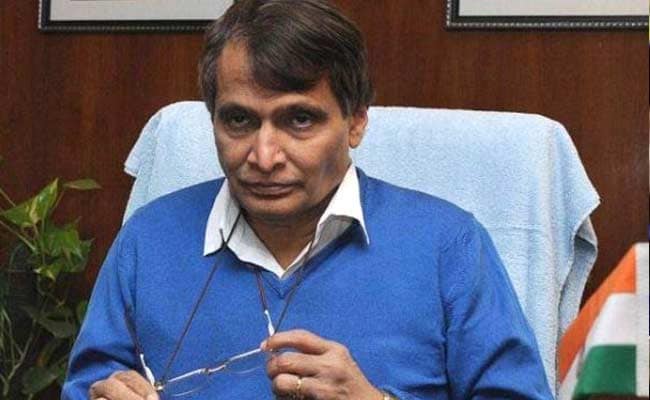 Suresh Prabhu travelled on TGV, the French high-speed train, which can clock up to the maximum speed of 320 km per hour. (File Photo)

New Delhi: With an aim to get a better understanding through first-hand experience, Railway Minister Suresh Prabhu travelled in the driver's cabin of a high-speed train in France covering 150 km distance between Paris and Reims in 45 minutes.

Mr Prabhu travelled on TGV, the French high-speed train, which can clock up to the maximum speed of 320 km per hour, during his recent visit to France.

Accompanied by a senior French Railway official, Mr Prabhu was briefed by the TGV driver about the various safety features and modern equipment installed in the driver's cabin.

Mr Prabhu was also shown around Reims station and was told about the maintenance and upkeep of the station on April 12, according to a senior Railway Ministry official.

Reims is known for its fine champagne.

Indian Railway has joined hands with France for up-gradation of railway track between New Delhi and Chandigarh for running semi-high speed train.

The field review of the project is being carried out by the SNCF, the state-owned railway in France and it is hopeful of completing the study by October-November this year.

SNCF is also involved in a study on Chhatrapati Shivaji Railway station in Mumbai.

Mr Prabhu has requested the SNCF to fast track the implementation of station development and sought French support in railway timetable preparation.

The Railway Minister also sought to know how to calculate the profit made per operation of the train.

Participating in the Emerging Markets Forum organized at the Banque de France premises in Paris, Mr Prabhu delivered a talk on "Emerging World in 2050" and enumerated the issues being faced today like climate change, migration, economic slow down, sustainable development.

He also evinced interest in having technical cooperation with SNCF in new areas of rail operation.