"This Segway speeds up and facilitates the work of the security forces, helping them work more efficiently with the help of technology," Railways Minister Piyush Goyal tweeted. 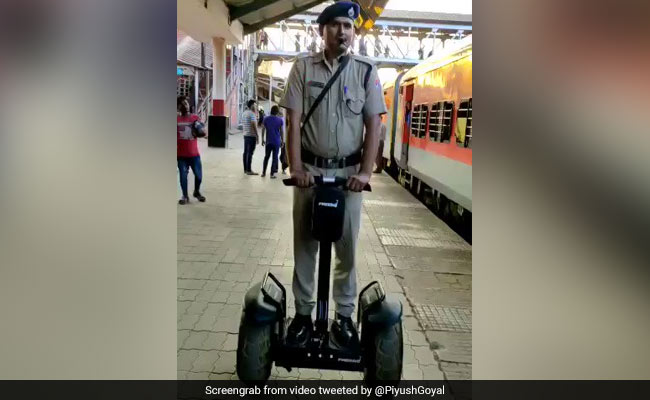 Piyush Goyal tweeted a video of a security official cruising the Madgaon station on a Segway.

A Segway has been introduced at a major railway station in Goa for security personnel to make announcement on the safety of passengers. The two-wheeled, self-balancing t-shaped transporter was seen on the platform of the Madgaon station.

"The Railways is using Segway at Goa's Madgaon station to warn passengers about safety. This Segway speeds up and facilitates the work of the security forces, helping them work more efficiently with the help of technology," Railways Minister Piyush Goyal tweeted, along with a video of a security official cruising on the Madgaon railway station platform with a Segway.

As he travels on the Segway, the security official announces, "When you travel, do not accept anything to eat or drink from strangers. It could have poison." He also urges passengers not to touch unattended objects and to alert railway officials or the Railway Protection Force (RPF) if they spot any such items at the station.

He can also be seen telling passengers to call on the helpline if they face any trouble during their travel.

The railways had introduced Segways at the Ahmedabad railway station in May last year for the use of the Railway Protection Force. Officers of the RPF could be seen cruising on the railway platforms at a speed of 8 to 10 km per hour on the Segways, which help them in better crowd control and patrolling at the railway station in Kalupur.

As many as six Segways were put into work at the Kalupur railway station in Ahmedabad. The RPF officers were trained to use it in a day.