Railway Protection Force Using Segways To Get Around Ahmedabad Station 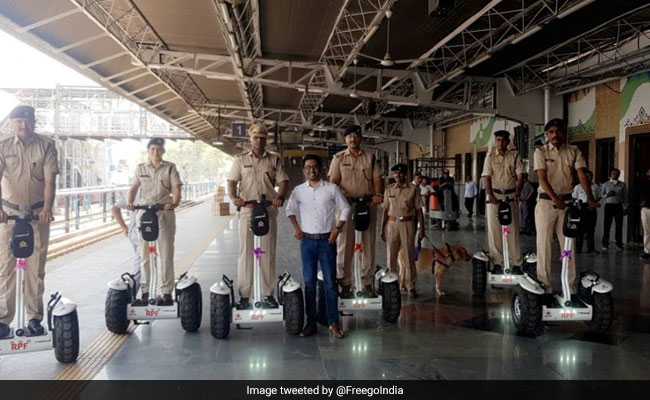 Segway, the two-wheeled, self-balancing, personal transporter that has become a rage in the West, has come to the Ahmedabad Railway Station for the use of the Railway Protection Force (RPF).

Officers of the RPF could be seen cruising on the railway platforms at a speed of 8-10 km per hour on the Segways, which help them in better crowd control and patrolling at the railway station in Kalupur.

Gracious Fernandes, Inspector of the RPF, Ahmedabad, told IANS, "The railway platform here stretches up to 800 metre and the Segway helps reach the different corners faster to help people.

"The battery operated Segways come handy in reaching and controlling the crowd at the station quickly as well as for overall patrolling."

As many as six Segways were put into work at the Kalupur railway station on May 23. The RPF officers were trained to use it in a day, Gracious Fernandes said.

"It is the initiative of the Ahmedabad railway division and the Segways are of immense help to the RPF as they can aid people in need in no time," Railway Public Relations Officer (PRO) Pradeep Sharma told IANS. He said each machine would have cost around Rs 1 lakh.

Gracious Fernandes said, "The Ahmedabad railway station is quite big. There are as many as 12 platforms and covering all of them on feet takes a long time. With the Segways, our work becomes faster and more efficient."

He could not recall any untoward incident since the Segways were introduced on May 23.