The Gandhis are staying at a hotel in Chharabra, where Priyanka Vadra's house is being built, a Congress leader said. 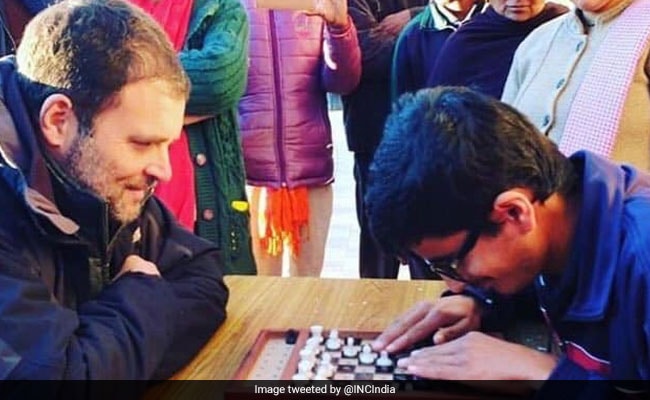 Rahul Gandhi is seen playing chess at the Institute for Children with Special Abilities in Shimla.

Congress president Rahul Gandhi, on a holiday in Shimla, stopped at a school for children with special abilities on Thursday and played a game of chess, reported news agency ANI.

In a photo, Rahul Gandhi is seen playing with a teen as his sister Priyanka Gandhi Vadra captures the moment on her mobile phone.

The Congress chief went to the popular hill resort for some R&R after his party's three-state victory in recent elections. Priyanka Vadra and her children also went with him.

Rahul Gandhi also saw his sister's house being constructed near the picturesque town.

The group took a road trip to Shimla and also stopped on the way for Maggi noodles and tea, photographs tweeted by Congress workers showed.

Local Congress leaders also met with their chief at the dhaba where he had stopped. He reportedly told them that he was on a personal visit to Himachal.

The Gandhis are staying at a hotel in Chharabra, where Priyanka Vadra's house is being built, a Congress leader said.

The Congress last week took three heartland states, Madhya Pradesh, Rajasthan and Chhattisgarh from the BJP, notching up important wins ahead of the national election due by May.