The NCC operates under defence ministry, and recruits and gives military training to cadets in high schools, colleges and universities all over India. 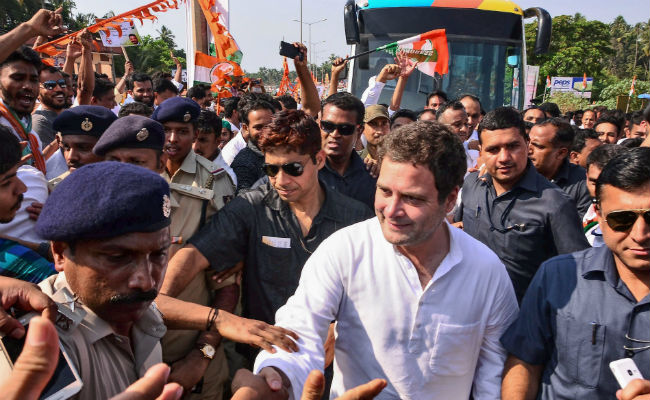 Rahul Gandhi is on a two-day visit to Karnataka till Sunday.

Mysuru: Congress President Rahul Gandhi on Saturday said that he was unaware of the training and benefits of the National Cadet Corps (NCC) in the country.

Responding to a question by a student at the Maharani's Arts and Commerce College for Women in Mysuru on the benefits he would like to be extended to the NCC cadets who have cleared 'C' certificate examination, Mr Gandhi admitted he was "unaware" of the training.

"I don't know the details of NCC training, so I won't be able to answer that. But, as a young Indian person I'd like to give you an opportunity where you can have opportunities, a successful education and a future where you can thrive in this country," the 47-year-old party chief said.

Mr Gandhi, who is on a two-day visit to the poll-bound Karnataka's old Mysuru region till Sunday, was taking questions from the students in a 30-minute long interaction.

The NCC, which operates under the defence ministry, recruits and gives military training to cadets in high schools, colleges and universities all over the country.

Promoted
Listen to the latest songs, only on JioSaavn.com
Under the voluntary programme, students have examinations with 'A', 'B' and 'C' level certificates, with the C certificate being the highest, giving the students benefits of special entry into the military and government services in the country and priority in competitive examinations.

During the two days, Mr Gandhi, who is on his fourth visit to Karnataka since February, will be holding public meetings and interacting with party cadres and people in Mysuru, Mandya and Chamrajnagar districts.
Comments
Rahul GandhiKarnatakaNational Cadets Cops Training