Rahul Gandhi's sharp attack came days after the Congress cited an audio tape in which Goa minister was purportedly heard telling that Manohar Parrikar has files related to 59,000-crore Rafale deal "in his bedroom". 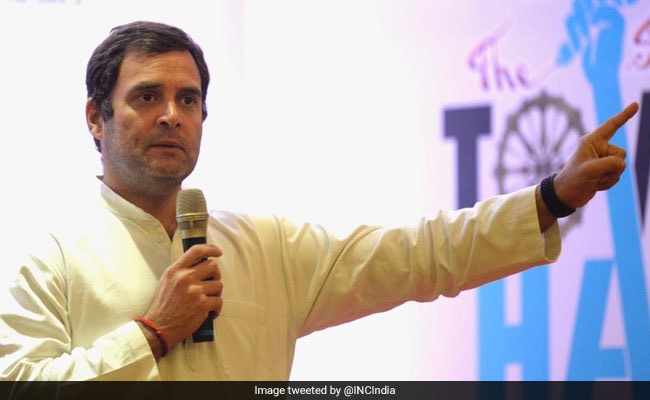 "It's obvious that Manohar Parrikar is in possession of explosive secrets," Rahul Gandhi said.

Congress President Rahul Gandhi, who is currently holidaying in Goa, alleged today that the audio recordings referring to Chief Minister Manohar Parrikar in possession of files related to Rafale jet deal were authentic and that Mr Parrikar was using the "explosive secrets" as a bargaining chip to retain his seat.

"It's obvious that the tapes are authentic and that Goa CM, Parrikar, is in possession of explosive RAFALE secrets,  that give him power over the PM," he tweeted.

30 days since the Goa Audio Tapes on RAFALE were released. No FIR or enquiry ordered. No action against the Minister either!

It's obvious that the tapes are authentic & that Goa CM, Parrikar, is in possession of explosive RAFALE secrets, that give him power over the PM. https://t.co/sKwwfIj0bM

Mr Gandhi's sharp attack came days after the Congress cited an audio tape in which a Goa minister was purportedly heard telling that Mr Parrikar has files related to 59,000-crore Rafale deal "in his bedroom".

The minister supposedly in the tape, Vishwajit Rane, has alleged that it was doctored. Manohar Parrikar, who was defence minister when the deal for 36 Rafale jets was signed between India and France, has also maintained that the audio clip was a "desperate attempt to fabricate facts".

The Congress, on its part, has tried to maintain that the recordings were authentic. Mr Gandhi even raised the issue in the parliament and even requested Speaker Sumitra Mahajan to allow him to play the audio tape in the House. Finance Minister Arun Jaitley had then countered that the tape was "false and fabricated", and asked the Congress president if he could authenticate it.

The Supreme Court last month said there was no reason to doubt the decision-making process, delivering a huge reprieve to the government amid Congress allegations of corruption in the Rs. 59,000-crore contract. The court rejected a probe and dismissed petitions that had alleged that the government had gone for an overpriced deal to help industrialist Anil Ambani's company bag an offset contract with jet-maker Dassault. "There is no evidence of commercial favouritism to any private entity," the court had said.