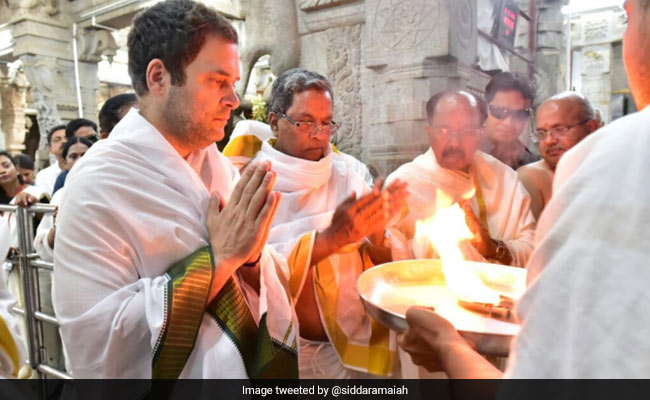 "Today Rahul Gandhi is virtually on a temple run, and is seen hopping from one temple to another. Whose inspiration is this? Narendra Modi. Even the foreign heads of states who visit India, head for Ganga Aarti," Mr Singh said.

"It is a drama. They are just trying to mimic Prime Minister Narendra Modi. Did he (Rahul Gandhi) use to visit temples earlier? Ask him. Earlier it was in Gujarat, and now it is in Karnataka that he is moving from one temple to another," Mr Singh told reporters, claiming that the Congress president was following in on the footsteps of PM Modi.

Rahul Gandhi today led his party in a nationwide day-long fast against caste violence, communalism and the non-functioning of parliament, for which the UPA major blames the ruling BJP.

Promoted
Listen to the latest songs, only on JioSaavn.com
Congress workers are observing the fast in all state and district headquarters to voice their protest against the BJP government and to promote communal harmony and peace across the country.

"Congress is the least bothered about the welfare of Dalits, poor and the oppressed sections of the society. Did Congress ever think of providing gas cylinders to the poor? It was done by Modiji. If anyone had thought for the betterment of a rag picker, it is PM Narendra Modi." Mr Singh said.