"Aren't we allowed to eat before 11 am?" snapped Congress leader Ajay Maken, who organised the protest. 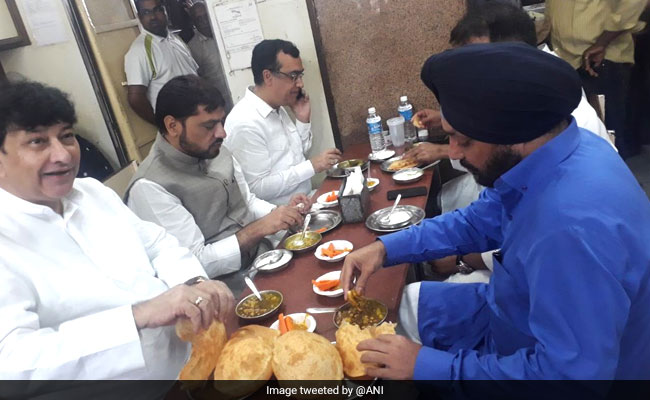 A fast by Congress leaders led by Rahul Gandhi on Monday bounced from one controversy to another. The protest at Mahatma Gandhi's memorial Rajghat is aimed at promoting communal harmony and protesting atrocities against Dalits, Congress leaders said.

As the protest started, an image of Congress leaders including Ajay Maken, Haroon Yusuf and Arvinder Singh Lovely, tucking into chhole bhature and other Delhi favourites at a popular restaurant started doing the rounds. BJP leaders like Vijender Gupta and Vijay Goel posted the image on Twitter.

The photo showed Arvinder Singh Lovely in the same blue shirt that he was seen wearing at the protest.

Delhi BJP leader Harish Khurana alleged that the Congress leaders were eating heartily to prep for their day-long fast.

"Aren't we allowed to eat before 11 am?" snapped Congress leader Ajay Maken, who organised the protest and was struggling to control the optics - to the extent that two controversial leaders accused in the 1984 anti-Sikh riots, Jagdish Tytler and Sajjan Kumar, were asked to leave the stage before Rahul Gandhi's arrival.

Arvinder Lovely claimed that the photo was taken before 8 am and said: "This is symbolic fast from 10.30 am to 4.30 pm. It is not an indefinite hunger strike. This is what is wrong with these (BJP) people. Instead of properly running the country, they concentrate on what we eat."

A lawmaker of the Akali Dal, Manjinder Singh, remarked: "Their mentality is to eat... they can't stay hungry." 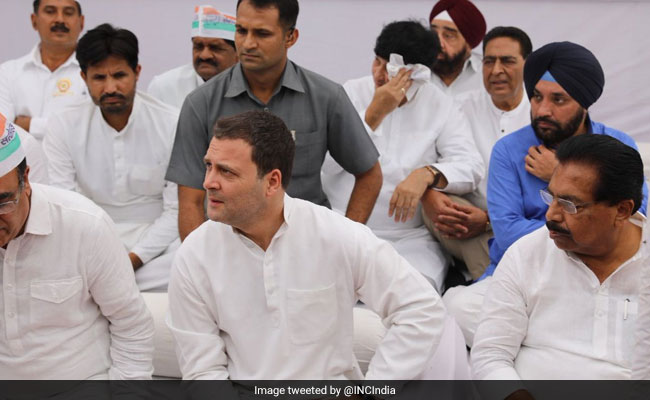 A few days ago, there were photos apparently showing members of Tamil Nadu's ruling AIADMK taking a break from their hunger strike and having platefuls of biryani. The AIADMK rubbished the images.

Promoted
Listen to the latest songs, only on JioSaavn.com
In the morning, the spotlight was briefly on Jagdish Tytler and Sajjan Kumar as they were both reportedly asked to leave the stage.

"We have specific criteria for people who will be seated on the stage. Former MPs will not be on the stage," Ajay Maken said.