"Tragedy That Will Destroy Millions": Rahul Gandhi On Condition Of Economy

Last month the World Bank predicted a 3.2 per cent contraction in India's GDP this fiscal year and, days later, the IMF said the GDP would shrink by 4.5 per cent 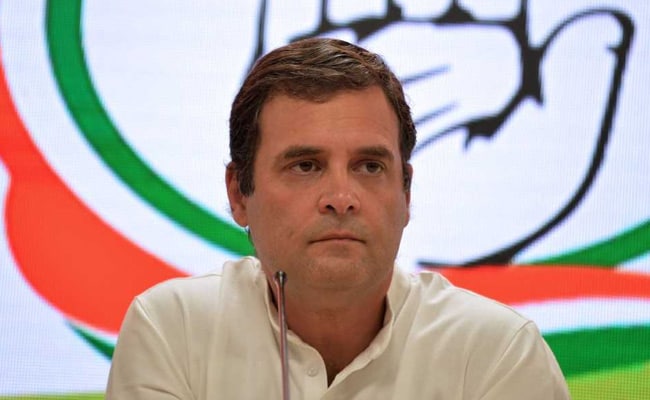 Congress leader Rahul Gandhi hit out at the government Tuesday over "economic mismanagement" of the country, describing it as a "tragedy that is going to destroy millions of families".

In a brief but pointed tweet the Lok Sabha MP wrote: "India's economic mismanagement is a tragedy that is going to destroy millions of families. It will no longer be accepted silently" and added the hashtag "#BJPsDistractAndRule".

Mr Gandhi also attached a screenshot of economic data relating to household income during the coronavirus lockdown, from which he highlighted three points: "8 in 10 Indian households lost income", "Rural households worse hit than urban ones" and "First time in decades, extreme poverty could see reverse trend".

The data was from a study by the Centre for Monitoring Indian Economy (CMIE) and researchers from the University of Chicago.

According to the data, "lower middle class had been badly hit (by the lockdown)" and 84 per cent of households (and 88 per cent of rural households) had reported either decline or loss of income.

The data also warned that a 10 per cent contraction in global GDP would leave over 170 million people in "extreme poverty" and that India will make up "almost half the estimated additional poor regardless of contraction scenario".

India's economic mismanagement is a tragedy that is going to destroy millions of families.

It will no longer be accepted silently.#BJPsDistractAndRulepic.twitter.com/6idGN1A7xS

Mr Gandhi has previously, and repeatedly, called on the government to immediately provide Rs 10,000 in cash support for poorer sections of the society and an economic stimulus package for struggling MSMEs (Micro, Small and Medium Enterprises).

In May, while responding to the government's Rs 20 lakh crore package, he warned of a "catastrophic problem" if money was not put into the hands of those worst affected by the outbreak and lockdown.

Concerns over contraction of India's GDP have been flagged since the coronavirus lockdown was first imposed in March.

In April the CII (Confederation of Indian Industry) said GDP could shrink by 0.9 per cent. Last month the World Bank predicted a 3.2 per cent contraction in this fiscal year and, only days later, the IMF (International Monetary Fund) said it would shrink by 4.5 per cent.

Around 12 crore people lost jobs in April alone, according to estimates by the CMIE.

The government has sought to jumpstart the economy, by both lifting restrictions in a phased manner and providing financial boosts to companies and farmers.

Last month, for example, a Rs 20,000 crore scheme to help two lakh MSMEs raise funds and the approval of a minimum support price for 14 crops were approved by the union cabinet.

On Monday the Finance Ministry, while quoting from the IMF report that said GDP would contract by 4.5 per cent, also said there were signs, in May and June, of an economic revival and that the government's commitment to structural reforms and social welfare measures would help accelerate this revival.

India To Have Submersibles That Can Carry Scientists To Depth Of 6,000 Metres Into Sea: Minister