BJP spokesperson Sambit Patra sought the Congress chief's apology on his comments on a range of issues, claiming that he presented India in a bad light by allegedly blaming the country's culture for violence against women. 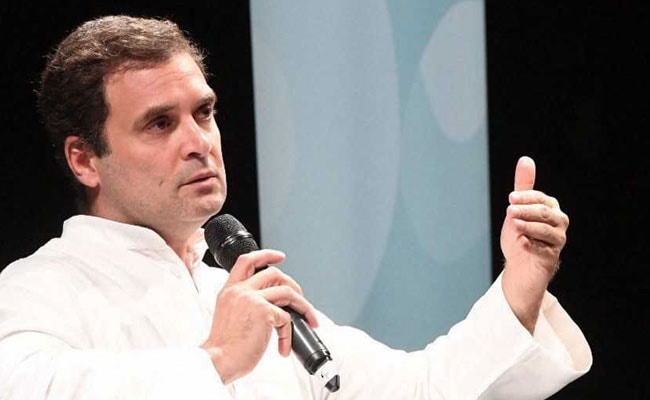 The BJP on Thursday accused Rahul Gandhi of belittling and insulting India in his address at an event in Germany, alleging that the Congress president tried to justify terrorism and "lied through his teeth" to attack the Narendra Modi government.

BJP spokesperson Sambit Patra sought the Congress chief's apology on his comments on a range of issues, claiming that he presented India in a bad light by allegedly blaming the country's culture for violence against women.

Addressing a gathering at the Bucerius Summer School in Hamburg yesterday, Mr Gandhi had cited the example of ISIS to say that the exclusion of a large number of people from the development process could lead to creation of terrorist groups in the world.

He had then accused the BJP government of excluding the tribals, Dalits and minorities from the development narrative, adding that "this could be a dangerous thing".

Hitting back at the Congress chief, Mr Patra told reporters, "Rahul Gandhi left no opportunity to belittle India and present it in a bad light. His speech was full of lies and deception and its sole aim was to insult India...He should apologise."

Taking a dig at Rahul Gandhi, Mr Patra said, "Rahul Gandhi has behaved like Rahul Gandhi and expecting any maturity from him is a futile exercise."

Mr Gandhi tried to justify terrorism and a terror outfit like the ISIS, Mr Patra said, adding, "There cannot be anything more frightening and worrying."

Mr Gandhi said the minorities in India would "sell their soul" to the ISIS if jobs were not available for them, the BJP spokesperson said, adding that this amounted to "denigrating" the community.

The Congress chief had a poor opinion of India, he said, adding that Mr Gandhi talked about China, even though India had become "one of the leading countries in the world" under the Modi government.

Mr Patra wondered whether the figures Rahul Gandhi cited regarding China producing 50,000 jobs every 24 hours compared to India's 44, were "manufactured in 10 Janpath".

"You have no data and you do no preparation," Mr Patra said, slamming Rahul Gandhi.

He said that Sonia Gandhi, who was the Congress chief for over 19 years, ruled India as a "proxy prime minister" for 10 years.

"Wasn't this the Indian culture which helped her reach the top? Rahul and Sonia Gandhi should come out and explain as to how they can point fingers at this great Indian culture," the BJP spokesperson said, seeking the Congress chief's apology for his response on the issue of women's safety in India.

Rahul Gandhi "lied through his teeth" in accusing the Modi government of striking down a law on atrocities against Dalits and tribals, Mr Patra said, adding that Parliament had in fact made the legislation more stringent by passing an amendment in the recently-concluded Monsoon Session.

Under the Congress-led UPA government, the Right to Food law was implemented in only 11 states, while the BJP-led NDA dispensation had enforced it in all the 29 states and seven Union territories of the country, he pointed out.

The rural employment scheme (MGNREGA) became a "monumental success" under the current government from a "monumental failure" it was under the UPA, Mr Patra said, adding that women accounted for over 56 per cent of its workforce now -- the highest ever.

The beneficiaries of over 431 government schemes were getting money, amounting to over Rs 4 lakh crore, credited directly to their bank accounts, resulting in the saving of Rs 90 crore, which used to be "pocketed" by Congress leaders earlier, he alleged.

Mr Patra also referred to the words of praise from international bodies for the reform measures undertaken by the Modi government to rebut Rahul Gandhi's charges.