"Nobody Asked If You Eat Onions": Rahul Gandhi's Jibe At Finance Minister

On Wednesday when asked by an MP if she ate onions, the prices of which had skyrocketed in the country, Nirmala Sitharaman had told the Parliament: "I belong to a family which does not eat onion and garlic." 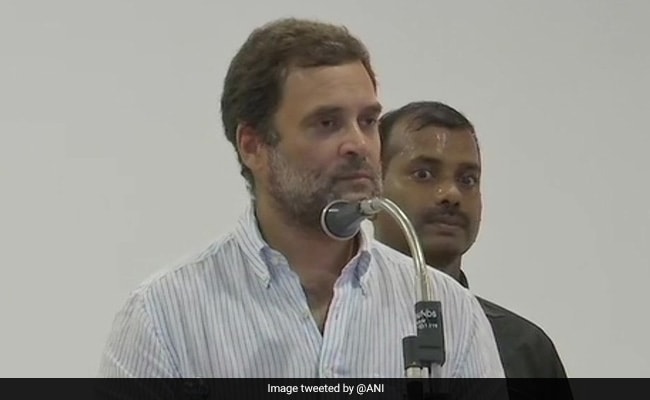 Rahul Gandhi said the Congress party will not disrespect Indians by imposing terms on them.

Congress leader Rahul Gandhi on Thursday took a jibe at Finance Minister Nirmala Sitaraman over the issue of onion prices, saying none asked her what she eats, but people wanted to know why the economy was struggling.

On Wednesday when asked by an MP if she ate onions, the prices of which had skyrocketed in the country, Ms Sitharaman had told the Parliament: "I belong to a family which does not eat onion and garlic."

Speaking at a leadership meet of the Congress, Mr Gandhi said: "Nobody is asking you whether you eat onions. You are the Finance Minister and we are asking why the economy is struggling. Even if you ask the poorest person you will get a sensible response," he added.

"We believe in the voice of our people but Narendra Modi believes in his own. He did not ask any shopkeeper about demonetisation, he did not ask farmers or anyone about it. He destroyed Indias greatest strength, its economy. He did the same with GST. Now you look at how the ridiculous the situation is?" Mr Gandhi asked.

The Congress leader also said his party will not disrespect Indians by imposing terms on them.

"We don't believe in thrashing and killing our own people. That's what we are fighting at a national level," the Wayanad MP said.

Mr Gandhi said he was bringing pressure on the state and the Centre for compensation and rehabilitation of victims of the floods in the state.

Speaking at a meeting at Nilambur, Mr Gandhi referred to the death of a student following snake bite in Wayanad and said Kerala had a reputation of having the best education in the country and the incident only showed facilities need to be improved.